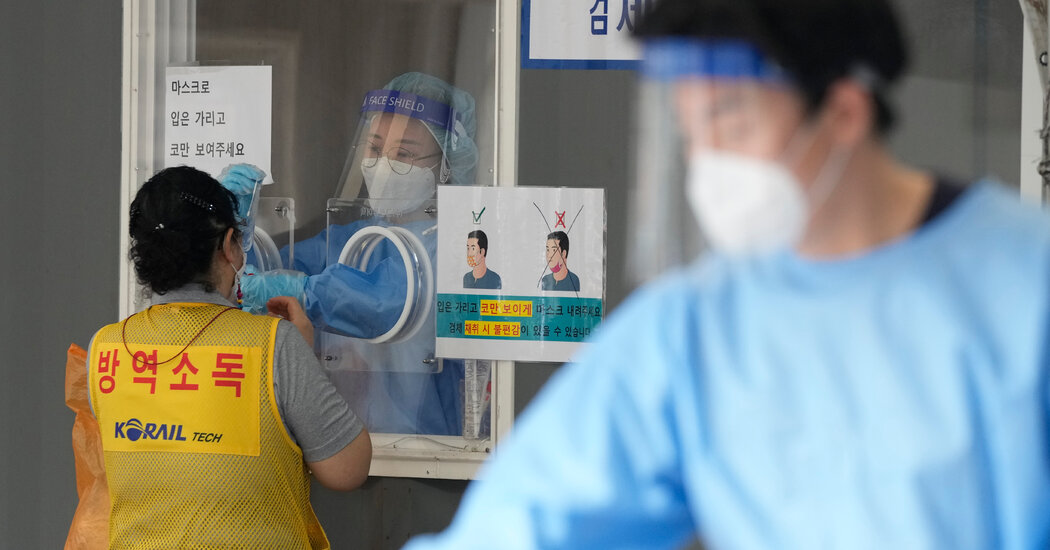 
We’re covering the rush to buy Covid treatment pills in Asia, the winner of the Nobel Prize in Literature and climate questions facing China.

A rush to buy Covid pills

At least four countries in the Asia-Pacific region announced agreements with the drug maker Merck to purchase a pill that the pharmaceutical company says could halve the risk of hospitalization and death from Covid-19.

Australia, Malaysia, Singapore and South Korea have all announced agreements to buy supplies of molnupiravir, the Covid treatment pill, even though their regulatory agencies have yet to approve the drug. Thailand and Taiwan are also reported to be in talks to purchase supplies of the pill.

The announcements came less than a week after the pill’s manufacturer released results from clinical trials that showed its effectiveness. The countries are the first to agree to buy the pill other than the U.S., which purchased enough pills for 1.7 million treatments for $1.2 billion in June.

Treatment: Merck’s pill, the first oral antiviral drug that can be taken at home, is expected to help limit future coronavirus outbreaks and to reduce the need for costly hospital stays.

Will China deliver on climate change?

Just weeks before a critical U.N. climate summit in Glasgow, attention is riveted on China and whether it will do more to cut emissions.

The world’s top energy agency said last week that China “has the means and capacity” to reduce its emissions. Its actions could be consequential for the planet’s climate.

Growth: The additional energy is demanded in China, where its manufacturing sector produces a third of the world’s factory goods. The biggest driver of China’s emissions, however, is its insatiable appetite for steel and cement, which are needed for apartment towers, bullet train lines, subways and other large construction projects.

Incentives: To encourage the use of renewable energy, the Chinese government has ordered electric utilities to charge customers up to five times as much when power is scarce, and generated mainly by coal, as when renewable energy is flooding into the grid.

The Nobel Prize in Literature was awarded to the Tanzanian writer Abdulrazak Gurnah for his works that explore the lingering trauma of colonialism, war and displacement. He is the first African to win the award in almost two decades.

In an interview with The Times, Gurnah, who moved to Britain at 18 as a refugee, said he “stumbled into writing,” partly as a way to cope with his sense of dislocation. He began by writing recollections of his homeland and other snippets without ever intending to publish them, but over the years, stories started to take shape. He has now written 10 novels. The most recent one, “Afterlives,” explores the generational effects of German colonialism in Tanzania, and how it divided communities.

“The thing that motivated the whole experience of writing for me was this idea of losing your place in the world,” Gurnah said. “Misery, poverty, homesickness, those kinds of things, you start to think hard and reflect on things.” Here are The Times’s reviews of his work.

Upcoming: The Nobel Peace Prize will be announced on Friday, which draws the most attention and is often considered the most prestigious of the prizes. Last year’s winner was the World Food Program, the U.N. agency that addresses hunger.

France is the European Union’s main breadbasket. Yet half of its farmers are over age 50 and set to retire in the coming decade, leaving nearly 160,000 farms up for grabs. A new business venture called Hectar is aiming to recruit a diverse group of 2,000 young people each year to lead a farm-tech revolution and carry French farming into the future.

The benefits of journaling

It’s not just for teenage girls or the literati. If you’re going through a difficult time or if you are feeling down, try putting pen to paper. Journaling has become a hallmark of the “self-care” movement.

Studies have found that writing in a journal can lead to better sleep and more self-confidence, Hayley Phelan writes in The Times. She started keeping a diary a few years ago, when she was unhappy in her marriage and her career.

“I was in a place where I would have tried anything to feel better,” Hayley writes. “If someone had told me that a daily practice of morning somersaults helped her get through a difficult time, you better believe I would have started rolling.”

Wondering how to start or what to write about? Here are tips.

That’s it for today’s briefing. See you next time. — Matthew

P.S. The U.S. war in Afghanistan began 20 years ago this week. Here’s a look back in photos by the Times photographer Tyler Hicks.

The latest episode of “The Daily” is about the state of the coronavirus pandemic.

Claire Moses wrote today’s Arts and Ideas. You can reach Matthew and the team at briefing@nytimes.com.

Justin Trudeau loses some shine now that he embodies the political...