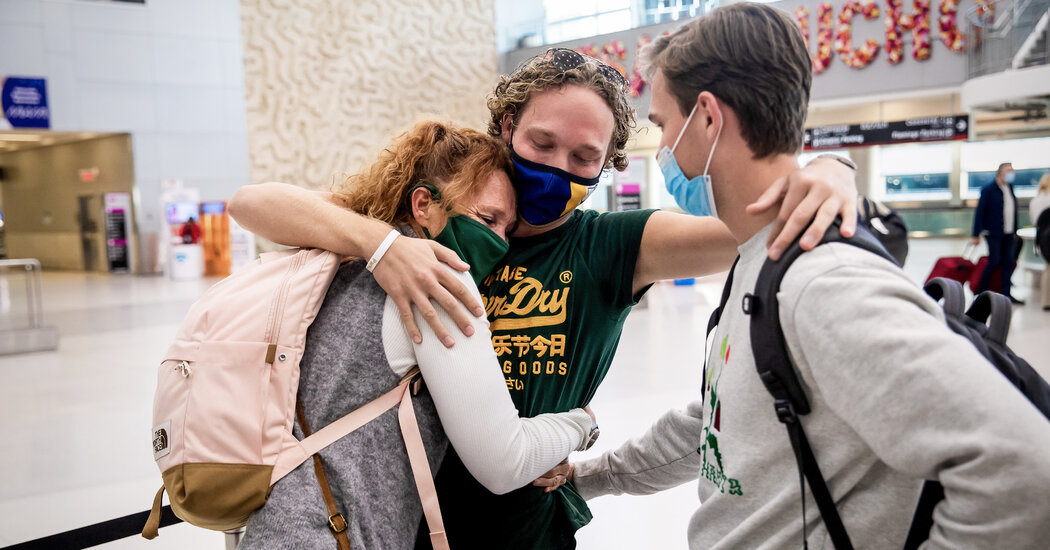 
Vaccinated travelers from abroad were allowed to enter the United States this week, drawing an agonizing 18-month wait to a conclusion and producing joyous reunions for thousands of people.

The country’s opening of the borders on Monday is expected to drastically increase the influx of tourist money and provide a degree of relief to a travel industry that has lost billions of dollars in the pandemic. On Monday alone, over 200,000 international fliers arrived in the United States, according to Customs and Border Protection.

Every customs booth in San Ysidro, Calif., was busy as visitors from Mexico crossed the border to reunite with relatives or seek medical care. But to the north, there were concerns that the Canadian government’s entry requirement of a P.C.R. test — more expensive and time-consuming than the rapid antigen test — might deter some Canadian trips to the United States.

At the same time, controversy over U.S. mandates for Covid prevention measures continued. A federal appellate court upheld a block on the Biden administration’s vaccine mandate for large employers; the government is expected to appeal. And 10 states sued the federal government on Wednesday over its vaccine mandate for health care workers.

Mask mandates had a mixed week in the courts. A federal judge ruled that Texas’ ban on mask mandates in schools violated the rights of students with disabilities, while in Pennsylvania, a judge struck down a state mask mandate for grades K-12; it remained in effect pending appeal.

Pfizer asked the F.D.A. on Tuesday to authorize booster doses of its vaccine for all those 18 and over — an expansion of the current authorization for those over 65 and younger people at high risk. The agency is expected to grant the request, perhaps in time for the holidays. Two states took that step this week ahead of federal approval: Colorado and California.

Meanwhile, the director general of the World Health Organization said that six times more booster doses were being given around the world each day than primary doses in low-income countries, a situation he called “a scandal that must stop now.” Countries including Germany, Israel, Canada and the United States have rolled out booster programs despite the W.H.O.’s objections.

Here’s what else happened this week:

Samsung will build a $17 billion chip plant in Texas.