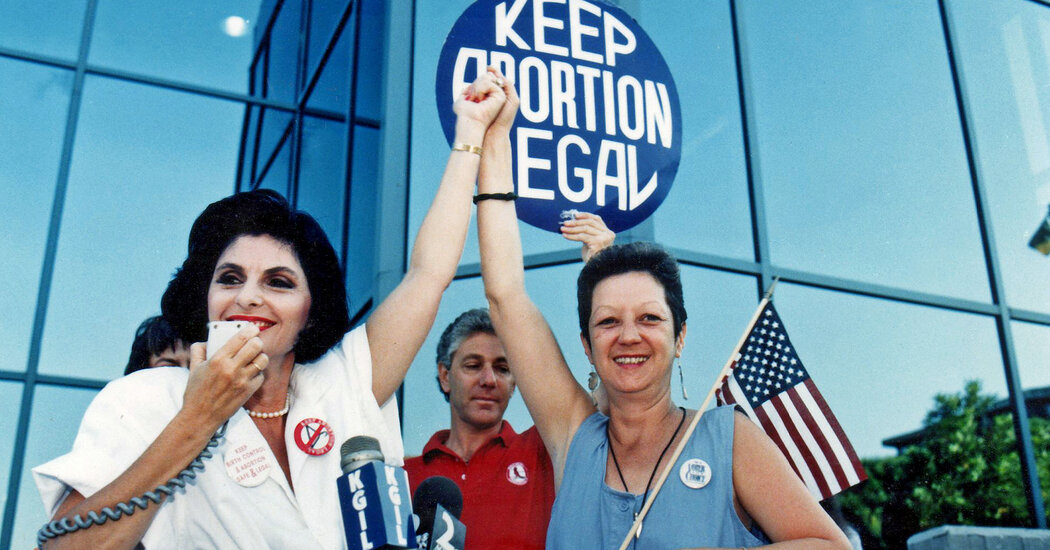 
Norma McCorvey — the “Jane Roe” whose search for a legal abortion led to Roe v. Wade — famously changed her mind about abortion rights. She flipped from being a pro-choice activist in her 30s to a pro-life activist and born-again Christian in her 40s.

McCorvey led a complex, sometimes tragic life. She suffered physical abuse and struggled with poverty and depression. She also had a habit of telling lies in public, including a false claim of rape and exaggerations about her political views.

Privately, however, McCorvey was more consistent about her views of abortion rights, as Joshua Prager documents in his recent book — full of revelations — that serves as a dual biography of McCorvey and Roe v. Wade. She was part of what she called “the mushy middle.” Prager writes:

Who Norma wanted to be was gay and pro-choice — but only moderately pro-choice. Norma no more absolutely opposed Roe than she’d ever absolutely supported it … Norma thus reflected the majoritarian middle ground. She embodied the national ambivalence, the desire for legal yet limited abortion.

Most Americans believe that abortion should generally be legal early in pregnancies and restricted later. Public opinion has barely moved in decades and is similar across women and men.

But even if public opinion is stable, abortion policy may be on the verge of major change. The Supreme Court will soon hear two abortion cases — one from Texas, with arguments set for next week; and one from Mississippi, with arguments on Dec. 1. Given the court’s conservative majority, many observers expect it to either overturn Roe or weaken it, freeing states to enact tight abortion restrictions.

As Prager documents, Texas has been at the center of abortion politics for more than half a century. McCorvey lived in the Dallas area when she sought an abortion in 1969. In response to her lawsuit, a federal court in Texas overturned the state’s abortion law, citing the right to privacy and leading to the landmark Supreme Court case in 1973.

This year, Texas enacted the country’s most restrictive abortion law, outlawing all abortions after about six weeks of pregnancy. The Supreme Court has let the law stand but also agreed to hear arguments about it.

I recently asked researchers at Gallup whether they could put together a portrait of public opinion on abortion in Texas. To do so with a large enough sample size, they combined multiple Gallup surveys from the past decade. (That would be a problem on an issue with changing opinions, like marijuana legalization or same-sex marriage, but it’s not a problem with abortion.)

The results are fascinating. Most Texans are part of that “mushy middle,” saying that abortion should be legal in certain circumstances.

And below is a breakdown of the middle group — those who said it should legal under certain circumstances. As you can see, many more Texans favor abortion being legal in “only a few” circumstances than in “most” circumstances.

Still, it is hard to see how Texas’ new law is consistent with the overall views of Texans. The law is stricter. Because many women do not realize they are pregnant until after six weeks, the law bans a vast majority of abortions. Other polls have found that most Americans — and probably most Texans — support widespread access to abortion in the first trimester of pregnancy (which lasts about 12 weeks).

Jeffrey Jones, a Gallup researcher, told me that abortion views in Texas are close to the average for red states. The state is more pro-choice than parts of the Southeast and more pro-life than much of the Great Plains, as Pew Research Center polls have found.

If the Supreme Court guts Roe — which guaranteed widespread abortion access in the first trimester — the country’s laws would become even more polarized. Some red states would likely outlaw almost all abortions, while some blue states would have few restrictions.

Is there any place with a legal framework that more closely matches Americans’ complicated views on abortion? There is: Europe.

“Most of its nations offer broad access to abortions before 12 weeks or so, and it gets harder to get one after that,” Jon Shields, a government professor at Claremont McKenna College, has written for Times Opinion. Those laws, Shields argued, offered a potential template for an American compromise on the issue, balancing a woman’s right to control her body and a fetus’s right to live.

Supreme Court justices like to claim that they are simply enforcing constitutional law, but history has shown they are often influenced by public opinion. If they do so again in this case, the polling offers a different, more nuanced picture than many state laws.

The popularity of Abba’s music hasn’t waned: “Abba Gold,” a compilation that came out in 1992, is on the British charts more than 1,000 weeks after its release. The musical “Mamma Mia!” — which incorporates Abba’s hits into its story — prompted a number of imitators and two film adaptations. And fans are still obsessed. (On that note, we want to know what Abba’s music means to you.)

This time around, none of the four band members, who are all in their 70s, will perform in person, Elisabeth Vincentelli writes in The Times. Starting in a custom-built London venue next year, they will perform as avatars — Abbatars — designed to replicate their 1979 look. Here’s one of the new songs, “Just a Notion.” — Claire Moses, a Morning writer

The pangrams from yesterday’s Spelling Bee were curtain and taciturn. Here is today’s puzzle — or you can play online.

Here’s today’s Mini Crossword, and a clue: “To be,” in Latin (four letters).

If you’re in the mood to play more, find all our games here.

‘Dancing with the Stars’ Season 30 premieres

Netflix cut a Latina housekeeper character from the show ‘Uncoupled’ after...

Jonas Brothers to be roasted in Netflix comedy special

‘Hawkeye’ misses the mark with an opening aimed at introducing Kate...