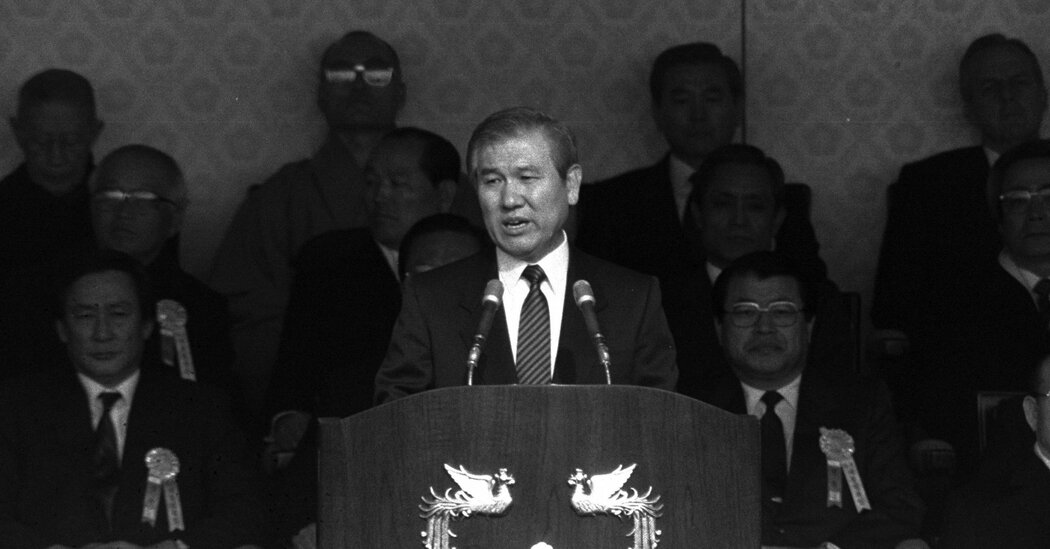 
SEOUL — Roh Tae-woo, South Korea’s last military-backed president who forged ties with Communist foes, tolerated the country’s rambunctious transition from dictatorship to democracy but ended up in jail for mutiny and corruption, died Tuesday. He was 88.

Mr. Roh, president from 1988 to 1993, led South Korea through a tumultuous period as a transitional, and largely unpopular, figure between military and civilian rule.

“He was a bridge between authoritarianism and democracy,” said Lee Chung-hee, a professor emeritus at Hankuk University of Foreign Studies. “South Korea went through the transition without suffering a bloody revolution.”

Roh Tae-woo was born in Daegu, in southeast Korea, on Dec. 4, 1932, the son of a rural government official who died when Mr. Roh was seven. At the Korean Military Academy he met another poor family’s son, Chun Doo-hwan, and the two forged a friendship that would shape their country’s future.

Speaking the same dialect and bonded by their regional prejudices, the two and their allies from Gyeongsang, a southeast province, climbed the army hierarchy, sponsored by the military strongman at the time, Park Chung-hee. They pulled one another up through a secret club they formed, called Hanahoe, which roughly meant “an association for one-for-all, all-for-one.”

When Mr. Park was assassinated by his spy chief in 1979, Mr. Roh, a division commander charged with guarding the border with North Korea, diverted his troops to support Mr. Chun, at the time a major general and head of the Army Intelligence Command, as Mr. Chun seized power in a coup on Dec. 12, 1979.

They also deployed tanks and paratroopers into the southwestern city of Gwangju, where citizens rose up in an armed rebellion in May 1980. The resulting bloodbath, which came to symbolize the brutality of the South’s military at the time, took at least 191 lives, including 26 soldiers and police officers.

Mr. Roh remained a low-key and faithful No. 2 during Mr. Chun’s iron-fisted rule, which lasted until early 1988. He oversaw South Korea’s successful bid for the 1988 Olympics, beating huge odds against the bid of rival Japan. In a memoir, he wrote that part of his winning strategy was to impress International Olympic Committee members by assigning Korean beauty queens as their personal escorts at I.O.C. meetings.

In 1987, Mr. Chun handpicked Mr. Roh as the presidential candidate of his ruling party. That effectively made him the next president — the country chose its president by an electoral college filled with pro-government delegates — until citizens rose up in Seoul and other cities to stage huge protests demanding an end to military rule.

To head off rioting, Mr. Chun and Mr. Roh acceded to demands for political reforms, including holding a popular election. Mr. Roh won that contest easily when the opposition vote was split between two dissident candidates, Kim Young-sam and Kim Dae-jung, two men who despised each other as much as they disliked military rule. Mr. Roh’s victory made him the country’s first directly elected president in 16 years.

Mr. Roh presided over the opening ceremony of the Olympics, a coming-out party for a nation proud of having built a roaring economy from the ashes of the Korean War. The 1988 Games were a great success despite a North Korean attempt to sabotage them with the bombing of a South Korean passenger jet in 1987 and despite demonstrations by students chanting “Down with dictatorship!” and hurling kerosene bombs.

Emboldened, Mr. Roh pushed his policy of “Nordpolitik,” opening diplomatic relations with countries like the Soviet Union and China — an effort that helped thaw relations on the divided Korean Peninsula.

The two Koreas joined the United Nations simultaneously in 1991. They also signed an agreement to keep the peninsula free of nuclear weapons, an accord North Korea would flout with its six nuclear tests since 2006.

Mr. Roh was a marked contrast with the hardline ex-generals who had led the country before him, Mr. Park and Mr. Chun. Portraits of a smiling Mr. Roh went up on the walls of government offices. He allowed comedians to make fun of politicians, including Mr. Chun, his now disgraced friend, who was forced into exile in a Buddhist monastery as calls mounted to punish him and his relatives for corruption.

But he also became a patron for the “TK Mafia,” ex-generals and technocrats from Daegu, his hometown, and the surrounding Gyeongsang region, powerful figures who filled important government and party posts. During his rule, the police raided factories to break up workers’ strikes and arrested government critics, including dissidents who had returned from Pyongyang, North Korean’s capital, where they had promoted Korean unification.

“His rule had characteristics of both military authoritarianism and civilian presidency,” said Choi Jin, head of the nonpartisan Institute of Presidential Leadership.

Mr. Roh’s on-and-off tolerance for political protests, his vacillation between rival factions within his party, his meek smile — all these combined to give him the nickname he was best remembered for: Mul Tae-woo, the Korean equivalent of “Roh the spineless.”

His repeated appeal to his doubtful people — “Please, believe me; I am an ordinary guy like you” — turned him into the butt of ridicule after he stepped down in 1993, when he and Mr. Chun were each found to have diverted hundreds of millions of dollars in bribes into their own coffers.

They were also convicted in 1996 of treason and mutiny charges for their roles in the coup and the Gwangju massacre. Mr. Chun was sentenced to death — the sentence was later commuted to life imprisonment — while Mr. Roh was sentenced to 17 years in prison. Both were pardoned and released from in December 1997.

The two friends did not talk to each other in their ignominious retirements, although they lived in the same neighborhood in Seoul. Mr. Chun often ventured outside surrounded by his old colleagues, but Mr. Roh lived quietly, largely forgotten by the people he had led.

“Roh Tae-woo was a characterless president who has disappeared from popular memories,” said Mr. Choi, of the leadership institute. “South Koreans rebelled against dictators, but they like a leader with a strong character.”

Small Plane Crashes Near Milan, Killing All on Board

Inside the Struggle to Save Bulgaria’s Last Narrow-Gauge Railroad

2 Days After Cricket Victory Over India, Pakistan Still Feels the...

The Secret War Over Pentagon Aid in Fighting Wildfires