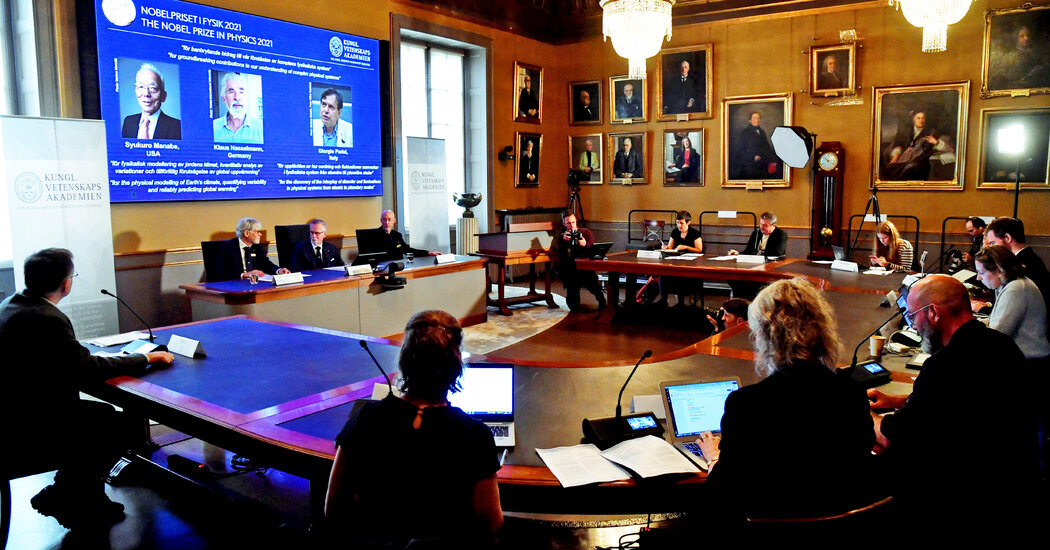 
Three scientists received the Nobel Prize in Physics on Tuesday for work that is essential to understanding how the Earth’s climate is changing, pinpointing the effect of human behavior on those changes and ultimately predicting the impact of global warming.

The winners were Syukuro Manabe of Princeton University, Klaus Hasselmann of the Max Planck Institute for Meteorology in Hamburg, Germany, and Giorgio Parisi of the Sapienza University of Rome.

Others have received Nobel Prizes for their work on climate change, most notably former U.S. Vice President Al Gore, but the Royal Swedish Academy of Sciences said this is the first time the Physics prize has been awarded specifically to a climate scientist.

Complex physical systems, such as the climate, are often defined by their disorder. This year’s winners helped bring understanding to what seemed like chaos by describing those systems and predicting their long-term behavior.

In 1967, Dr. Manabe developed a computer model that confirmed the critical connection between the primary greenhouse gas — carbon dioxide — and warming in the atmosphere. His later models, which explored connections between conditions in the ocean and atmosphere, were crucial to recognizing how increased melting of the Greenland ice sheet could affect ocean circulation in the North Atlantic, said Michael Mann, a climate scientist at Pennsylvania State University.

“He has contributed fundamentally to our understanding of human-caused climate change and dynamical mechanisms,” Dr. Mann said.

About a decade after Dr. Manabe’s foundational work, Dr. Hasselmann created a model that connected short-term climate phenomena such as rain to longer-term climate like ocean and atmospheric currents. Dr. Mann said that work laid the basis for attribution studies, a field of scientific inquiry that seeks to establish the influence of climate change on specific events like droughts, heat waves and intense rainstorms.

Dr. Parisi is credited with the discovery of the interplay of disorder and fluctuations in physical systems, including everything from a tiny collection of atoms to the atmosphere of an entire planet.

All three scientists have been working to understand the complex natural systems that have been driving climate change for decades, and their discoveries have provided the scaffolding on which predictions about climate are built.

They Were Promised a New Home. Then They Tried to Escape...

Daniel Craig on why you should see ‘No Time to Die’...

What Is the Northern Ireland Protocol That Britain and the E.U....