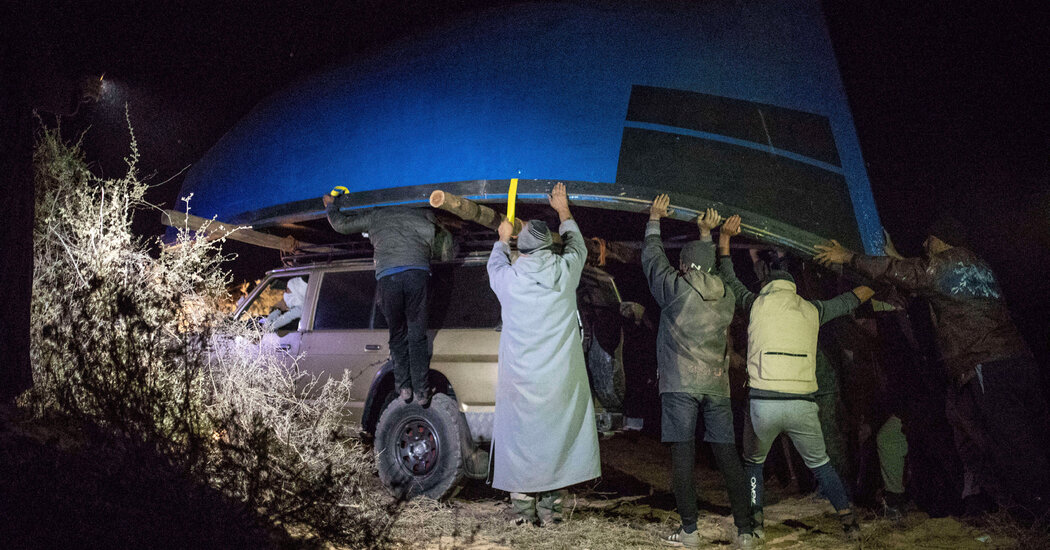 
Nearly 60 African migrants are believed to have drowned while trying to reach Spain’s Canary Islands, the latest tragedy during a year when fatalities on this ocean crossing have more than doubled from the same period in 2020.

Helena Maleno Garzón, the founder of Caminando Fronteras, a Spanish nongovernmental organization that helps migrants, alerted on Twitter that 57 people had died, including 12 children. “Put an end to this border massacre,” she pleaded.

Ms. Maleno later explained by phone that the victims were among 62 people who boarded a boat last week from the Western Sahara region administered by Morocco. She said that 16 of the dead had been recovered and were in Dakhla, a port city in the Western Sahara where the voyage began, awaiting formal identification. Only five from the boat survived, she said.

“They were going around in circles because they lost their way, which is what happens to a lot of the boats that leave from Dakhla, and they then tried to get back, which is when this tragedy happened,” Ms. Maleno said. The precise details of the shipwreck and rescue of the handful of survivors were not immediately clear, she said.

The Canary Islands, in the Atlantic off northwestern Africa, are one of the most dangerous migration destinations in the world. Recent reports have warned that the number of migrants trying to cross there from Morocco and other places along the western coast of Africa have increased this summer, often with deadly consequences.

Since the start of 2021, there has been “an alarming loss of life” on the route to the Canary Islands, the International Organization for Migration said in a report released a week ago.

August was the worst month so far, accounting for almost half of the 785 people — including 50 children — who have died or disappeared so far this year while traveling from Africa to the Canary archipelago.

The I.O.M., an agency of the United Nations, said that the number of fatalities had more than doubled compared with  the same period  in 2020. In all last year, 850 migrants died on the Canary route, the highest number of victims since the I.O.M. began collecting data in 2014.

Still, Frank Laczko, the director of the I.O.M.’s Global Migration Data Analysis Center, warned last week that the real number of lives lost at sea was probably much higher. “Invisible shipwrecks, in which there are no survivors, are believed to be frequent occurrences on this route but are nearly impossible to verify,” he said in the report.

Over the past two years, the Canary Islands have increasingly become a gateway to Europe for thousands of migrants, including a rising number who board ships from ports like Dakhla in the Western Sahara, a heavily militarized area where Morocco has been involved in a longstanding territorial conflict.

Migration experts think part of the increase in travel to the Canary Islands has come as human traffickers revived that route after other crossings, notably that between Italy and Libya, became impassible.

Even as many die at sea, the influx of those who survive the journey has strained the migration centers in the Canary archipelago, which is also one of Spain’s main tourist destinations. Last year, the Spanish government housed thousands of migrants who had reached the island of Gran Canaria in hotels that had been shuttered by the coronavirus pandemic.

Ms. Maleno said that the distressed migrants on the boat had managed to alert her organization a few days ago, and their call for help had been transmitted to the Moroccan and Spanish authorities, but to no avail. She said that officials from Ivory Coast and Guinea had gone to Dahkla to help identify the victims, most of whom are believed to have come from these two countries.

Spain has also continued to grapple with an influx of migrants to its two North African enclaves of Ceuta and Melilla, where many try to climb over the border fences that surround them.

On Friday, the Moroccan and Spanish border police prevented about 700 migrants from scaling the fences of Melilla, according to RTVE, the Spanish national broadcaster, which cited unnamed officials from Spain’s military police and the regional government of Melilla.

Last May, thousands managed to enter Ceuta in the midst of political feuding between the Spanish and Moroccan governments over Spain’s decision to allow a separatist leader from the Western Sahara to get Covid-19 treatment in mainland Spain.

The Strange Allure of Pool-Cleaning Videos

Biden Declared the War Over. But Wars Go On.