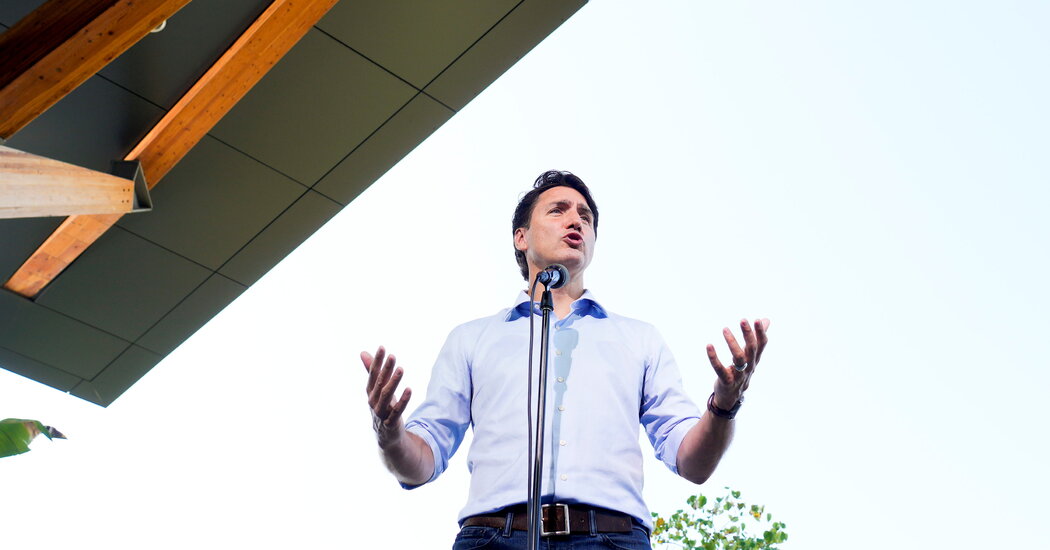 
Much has changed for Justin Trudeau since 2015, when he led his Liberal Party to a surprise rout of the Conservatives and became prime minister of Canada, promising a fresh, open approach to government, what he called “sunny ways.”

The son of Pierre Elliott Trudeau, the younger Mr. Trudeau has been a celebrity since birth. And in office he became almost a spokesman for the world’s liberals, standing up to former President Donald J. Trump, supporting women’s and Indigenous rights, welcoming immigrants and fighting climate change and racism. His effective, almost theatrical, speaking style and carefully cultivated image-making, down to his socks, bolstered his political celebrity. He is the sort of world leader who gets election endorsements from other famous politicians.

But after six years of governing, he is also now the political establishment, with a track record, and missteps, for opponents to criticize.

Whatever the result of the election, the campaign has bruised him, analysts say, bringing out more hecklers and protesters, and more attacks on his personal integrity from opponents.

“If you’re in power for six years or five years, you’re going to have more baggage,” Ben Chin, Mr. Trudeau’s senior adviser, said. “You have to make tough decisions that not everybody’s going to agree with.”

For much of his time in office, opposition party leaders have accused Mr. Trudeau of putting his personal and political interests ahead of the nation’s good. The snap election being held now, during a pandemic, they say, is the most recent example.

Mr. Trudeau said the election was necessary to give the Liberals a majority in Parliament instead of governing as a minority that must rely on the support of rivals to pass legislation. His rivals say the election is simply a power grab.

Mr. Trudeau has also given them fodder in the form of myriad ethical accusations.

The federal conflict of interest commissioner found that Mr. Trudeau broke the law when he and his staff pressured his justice minister, an Indigenous woman, in 2018 to offer a large Canadian engineering firm, SNC-Lavalin, a deal allowing it to avoid a criminal conviction on corruption charges. While he champions diversity and racial justice, it came out during the 2019 vote that Mr. Trudeau had worn blackface or brownface at least three times in the past.

More recently was a controversy involving a government contract for a charity close to his family. Although he was personally cleared, the news coverage persisted for months.

Mr. Trudeau was the face of the nation during the worst of the pandemic, appearing either virtually or on the grounds of his official residence for news conferences that, at one point, ran seven days a week. While there were hiccups along the way, his handling of vaccine procurement and his economic support programs for workers and businesses were ultimately well received, raising his popularity.

But his campaign has brought out unruly crowds protesting vaccines and vaccine passports. One campaign stop was canceled because of safety concerns. At another, Mr. Trudeau was pelted with gravel.

Many of the protesters, including the man that the police charged with throwing gravel, are supporters of the People’s Party of Canada a far right anti-vaccine, anti-immigration group led by Maxime Bernier, a former Conservative cabinet minister.

The protesters are well outside of the mainstream public opinion in Canada. But it’s unclear if they have generated sympathy for Mr. Trudeau or obscured his campaign message, which is, at its essence, that he needs a strong mandate to end the pandemic and lead the nation to recovery.

Can Macron Lead the European Union After Merkel Retires?

A record number of Americans are quitting their jobs