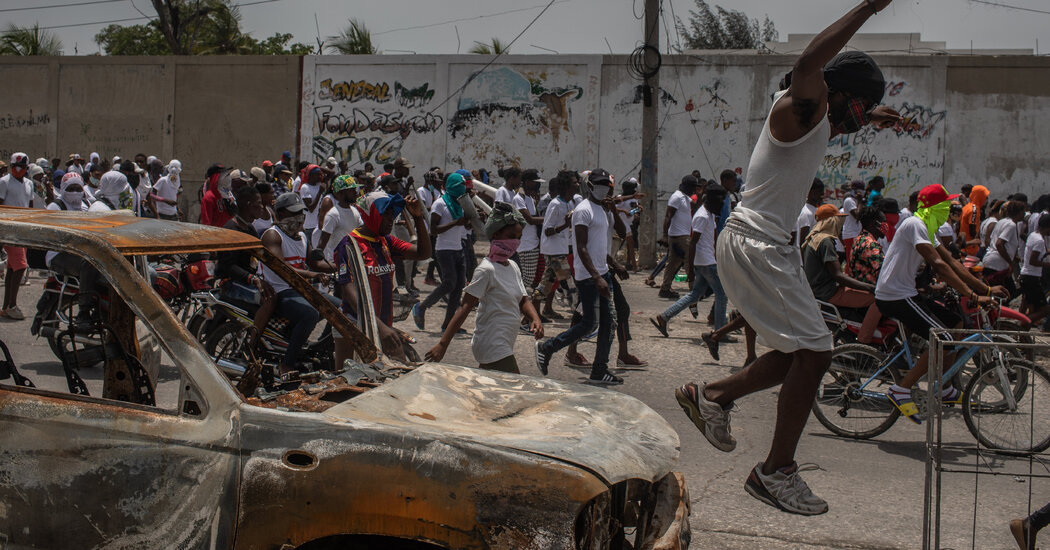 
They raped women, burned homes and killed dozens of people, including children, chopping up their bodies with machetes and throwing their remains to pigs.

The gruesome massacre three years ago, considered the worst in Haiti in decades, was more than the work of rival gangs fighting over territory. It was organized by senior Haitian officials, who provided weapons and vehicles to gang members to punish people in a poor area protesting government corruption, the U.S. Treasury Department announced last year.

Since then, Haiti’s gang members have grown so strong that they rule swaths of the country. The most notorious of them, a former police officer named Jimmy Cherizier, known as Barbecue, fashions himself as a political leader, holding news conferences, leading marches and, this week, even parading around as a replacement for the prime minister in the violent capital.

After gangs shot at a government convoy and shut down the official commemoration of the death of the country’s founding president on Sunday, Mr. Cherizier presided over the ceremony himself, dressed in a white three-piece suit, surrounded by cameras and masked guards with assault rifles as he laid wreaths at the site.

“The gangs have more authority than our leaders,” said Marie Yolène Gilles, the head of a local human rights group, the Clear Eyes Foundation. “If they say, ‘Stay home,’ you stay home. If they say, ‘Go out,’ you can go out. It’s terror.”

The brazen kidnapping of 17 people with an American missionary group over the weekend, believed to have been carried out by a rival gang called 400 Mawozo, underscored the growing power of Haiti’s gangs. By some estimates, they now control more than half of the country and in some places, they operate like de facto governments, with their own courts, “police stations” and residential fees for everything from electricity to school permits.

Gangs have long held sway in many poor neighborhoods, but they began to gain more dominance after Jovenel Moïse was sworn in as president in 2017, experts say, fueled by the erosion of democratic institutions under his watch and his government’s deployment of gangs as tools of oppression.

And while the American government and United Nations have long been aware of the growing connection between the gangs, the government and the Haitian police, they made few moves to combat the problem, partly for fear of upending what little stability Haiti had, current and former officials say.

That semblance of stability collapsed in July, when Mr. Moïse was assassinated in his bedroom in a killing that remains unsolved and has further exposed the country’s institutional weakness.

“His administration weakened the police and justice system,” Pierre Espérence, the executive director of the Haitian National Human Rights Defense Network, said of Mr. Moïse’s government. “There were no controls on the port, the border, the airport — weapons and ammunition arrive easily in Haiti. And then, they used the gangs to massacre the people in the slums.”

The attacks, he said, were attempts to secure political control in the run-up to elections in the capital region, which represents 40 percent of the country’s electorate — much of it in crowded slums.

Mr. Espérence’s organization has documented more than a dozen armed attacks by gangs since 2018, leading to the death or disappearance of more than 600 people. In many cases, those reports cite a police role in the killings, including the involvement of active officers and the use of equipment like armored cars or tear gas.

In at least two cases, the organization highlighted the involvement of members of Mr. Moïse’s government.

None have resulted in arrests or robust investigations by the police, according to Rosy Auguste Ducéna, the network’s program director. Nor have any police officers been penalized over allegations of their involvement.

“That’s why we say the violence that is established in Haiti today is a violence of the state,” she said.

A senior official in the government of Prime Minister Ariel Henry, who was tapped by Mr. Moise and took over the nation in July, said Mr. Henry had no link to the abuses the previous administration is accused of facilitating. To the contrary, the official, who was not authorized to speak publicly, said Mr. Henry, a doctor, was brought in to clean up the mess in Haiti, and has pledged to bring justice for past massacres and make every effort to eliminate the gangs.

At the center of the allegations is Mr. Cherizier and the alliance of nine gangs he leads, known as the G9 in Family and Allies coalition. But the “intellectual architect” of the massacre in 2018 was Joseph Pierre Richard Duplan, an elected member of the president’s party who provided weapons to gang members, the Treasury Department said last December.

Witnesses described seeing Mr. Duplan admonishing gang members during the attack, a United Nations report stated, saying, “You killed too many people. That wasn’t your assignment.”

Both officials lost their positions almost a year later, but neither has faced charges. The police stopped Mr. Monchéry in February over an issue with his license plate, the Haitian newspaper Le Nouvelliste reported, but released him soon after.

“When the police tell us that they’re actively investigating, we can say that’s obviously false,” Ms. Ducéna said.

But the American action came after years of continued public support for Mr. Moïse, despite heated warnings from American lawmakers about his increasingly autocratic rule. Both the American government and the United Nations, whose support are considered essential ballast for any Haitian president, have been accused of turning a blind eye to repeated reports of gang infiltration in his government.

One of the first mass killings of civilians under Mr. Moïse’s presidency began as an anti-gang raid in the poor neighborhood of Grand Ravine.

In November 2017, Haitian police officers — including Mr. Cherizier, who was still on the force at the time — raided a school campus. By the end, eight civilians had been killed, including a teacher, a security guard and a prospective student “executed in cold blood,” according to an internal inquiry conducted by the Haitian government.

Police officers with the United Nations Mission for Justice Support in Haiti, who had helped plan the raid, had been standing guard outside.

A few months later, Susan D. Page, then the head of the U.N. mission in Haiti, released a blistering statement calling for the Haitian authorities to investigate “allegations of human rights violations by units of the Haitian National Police,” including the botched operation.

In protest, the Moïse government recalled its ambassador to the United Nations. Already facing withering criticism in Haiti for setting off a devastating cholera outbreak in the country in 2010, the United Nations quickly removed Ms. Page from her post.

“I was running a justice support mission,” Ms. Page said in an interview. “Am I not supposed to call for justice?”

Farhan Aziz Haq, a U.N. spokesman, said in a statement that the justice support mission had not authorized the “high-risk search” conducted by the Haitian police. An internal inquiry found that no U.N. officers had “proceeded to the location where the alleged killings took place” or fired their weapons.

The United Nations withdrew its large peacekeeping force in 2017, with a damaged legacy that included peacekeepers introducing cholera to the country and sexually abusing and impregnating girls as young as 11. The departure left a much smaller force to support the police, which also pulled out in 2019. In its absence, a security vacuum grew, particularly in poor parts of the capital.

After several massacres involving gang members and Haitian police officers, including Mr. Cherizier, more than a hundred members of the United States Congress wrote to the Trump administration in 2019 to demand an investigation into extrajudicial killings by the authorities. Nothing happened, said Representative Andy Levin of Michigan, a co-chairman of the House Haiti Caucus.

“I really hoped that there would be a change in direction when President Biden took office,” Mr. Levin said. “I’m still waiting.”

Haitians in the capital live in continual fear. Kidnappings have exploded, long surpassing last year’s high, which itself had increased significantly from the year before, according to the United Nations.

“Today, we are talking about it because American missionaries were kidnapped,” Ms. Ducéna said. “In our reality, it’s our daily life. Every day, we leave our homes without knowing if we’ll be coming back.”

In Haiti’s battered economy, kidnapping has become a prime source of income for the gangs as well. The gang that kidnapped the 16 Americans and one Canadian with Christian Aid Ministries has demanded a ransom of $17 million — one for each captive.

Mr. Cherizier, who leads a rival collection of gangs, has denied any links to the government. Instead, he presents himself as a revolutionary, fighting against poverty in the slums. On Sunday, the day after the missionaries were kidnapped, the Haitian government’s cavalcade came under gunfire and sped off before the prime minister could attend the ceremony honoring the nation’s founding father.

With the government chased off, Mr. Cherizier then led the procession instead, relishing the spectacle, as if he were the nation’s true leader. Ms. Gilles speculated that he might run for office himself in the next election.

“Everything can happen in this country,” she said, listing politicians who were elected despite facing serious criminal allegations. “It would not be the first time that people with trouble with the law are elected.”

Bank of England official warns inflation could top 5% as UK...

A Chastened Alibaba Tones Down Its Singles Day Retail Bonanza