Home News In Week of Words, It Often Seemed Like the Divided Nations 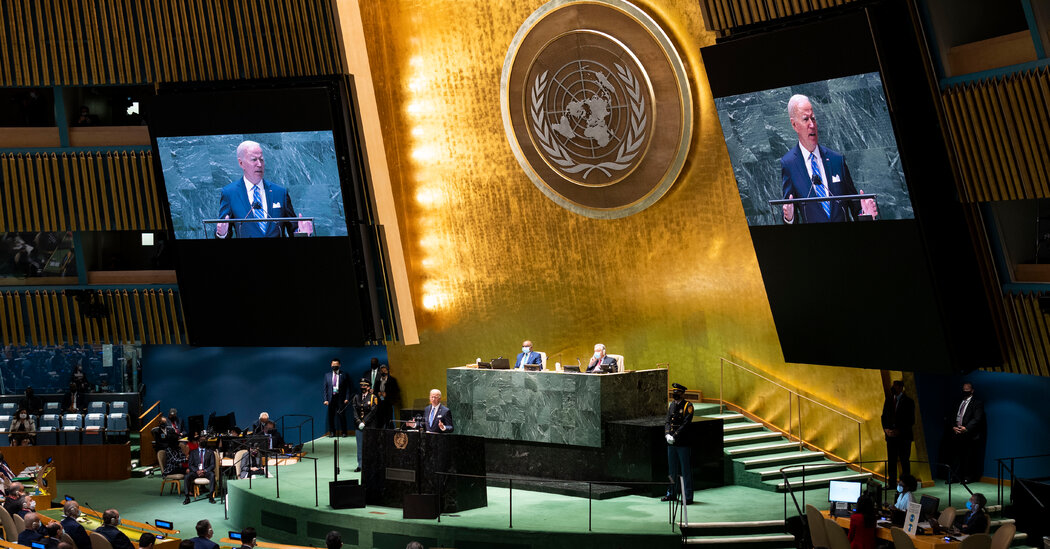 
They all spoke about unity, shared values and the common enemies of Covid-19 and climate change. But in speeches this past week by dozens of leaders at the U.N. General Assembly, many simply talked past each other when it came to the many regional conflicts percolating around the world.

Intransigence, and sometimes even hardened positions, permeated the words from antagonists in the Middle East, Asia, Latin America and Europe. And that doesn’t include any words that might have been spoken by government envoys from Afghanistan and Myanmar, who did not even address the gathering because of disputes over who should rightfully speak for those conflict-ridden countries.

While the General Assembly has always been a forum for venting grievances, analysts who monitor the speeches saw fewer hints of compromise this year. Ian Bremmer, president and founder of the Eurasia Group, a political risk consulting organization, said the stubbornness appeared to reflect a sense of greater impunity among rogue actors “given less coordinated engagement and leadership from the United States and allies.”

Here is a sampling of what representatives of countries entangled in conflict said at the annual convocation held by the United Nations, founded 76 years ago to help avert war.

Iran and the so-called P5+1 powers — the five permanent members of the Security Council (Britain, China, France, Russia and the United States) plus Germany — have reached an impasse over how to save the 2015 accord, known as the Joint Comprehensive Plan of Action, or J.C.P.O.A., which nullified many sanctions on Iran in exchange for its verifiable guarantees of peaceful nuclear activity. President Donald J. Trump abandoned the agreement in 2018 and Iran stopped complying. President Biden wants to restore the accord.

President Biden: “The United States remains committed to preventing Iran from gaining a nuclear weapon. We are working with the P5+1 to engage Iran diplomatically and seek a return to the J.C.P.O.A. We’re prepared to return to full compliance if Iran does the same.”

President Ebrahim Raisi of Iran: “Today, the whole world, including the Americans themselves, have admitted that the project of countering the Iranian people, which manifested itself in the form of violating the J.C.P.O.A. and was followed by the ‘maximum pressure’ and arbitrary withdrawal from an internationally recognized agreement, has totally failed. However, the policy of ‘maximum oppression’ is still on. We want nothing more than what is rightfully ours.”

The Democratic People’s Republic of Korea, as North Korea calls itself, has sent mixed signals toward the Biden administration following the collapse of dialogue between the North Korean leader, Kim Jong-un, and Mr. Biden’s predecessor. But North Korea’s recent missile tests — including one on Monday as its U.N. ambassador was speaking at the General Assembly — points to further stalemate in efforts aimed at North Korean nuclear disarmament and a formal end to the Korean War, now 71 years old.

President Moon Jae-in of South Korea: “I hope to see that the Korean Peninsula will prove the power of dialogue and cooperation in fostering peace.”

Ambassador Kim Song of North Korea: All American offers of dialogue are “nothing more than flowery words to cover up their hostile policy.”

Israel, the Palestinians and the Middle East

A diverse coalition that ended an era dominated by Benjamin Netanyahu, the longest-serving Israeli leader, has shown little inclination to re-engage with the Palestinians over a two-state solution to their protracted conflict. At the General Assembly, Israel sought to avoid the issue, emphasizing the Abraham Accords normalization with the United Arab Emirates and Bahrain, assailing the 20-year commemoration of the Durban Declaration against racism, which Israel and its Western allies consider anti-Semitic, and focusing its criticism on Iran.

President Mahmoud Abbas of the Palestinian Authority: “There are still some countries that refuse to acknowledge the reality that Israel is an occupying power, practicing apartheid and ethnic cleansing. These countries proudly state that they have shared values with Israel. What shared values are you referring to?”

Prime Minister Naftali Bennett of Israel: “For the past three decades, Iran has spread its carnage and destruction around the Middle East, country after country: Lebanon, Iraq, Syria, Yemen, Gaza. What do all these places have in common? They are all falling apart. Their citizens — hungry and suffering. Their economies — collapsing. Like the Midas touch, Iran’s regime has the ‘Mullah touch.’ Every place Iran touches fails.”

The nuclear-armed neighbors have shown no sign of easing their bitter feud over the disputed territory of Kashmir, punctuated by mutual accusations that have intensified since India revoked Kashmir’s limited autonomy two years ago. While India’s leader, in his General Assembly speech, never accused Pakistan by name of fomenting terrorism, the inference was clear.

Prime Minister Narendra Modi of India: “We belong to a country that has given the world not war but Buddha’s message of peace. And that is the reason our voice against terrorism, to alert the world about this evil, rings with seriousness and the outrage.”

Prime Minister Imran Khan of Pakistan: “The onus remains on India to create a conducive environment for meaningful and result-oriented engagement with Pakistan.”

The War in Syria

Now in its 11th year, the conflict has displaced half the prewar population and left hundreds of thousands dead, with no clear plan for the enormous reconstruction required. President Bashar al-Assad of Syria, backed by Russia and Iran, has proclaimed victory, but Western powers and human rights groups consider him a pariah. Parts of the country remain under the control of foreign forces, including Turkey and the United States.

Foreign Minister Fayssal Mekdad of Syria: “Just as we managed to wipe out terrorists from most of Syria, we will work to end the occupation with the same resolve and determination, using all possible means under international law. History shows that Syria always drives out occupiers sooner or later.”

President Recep Tayyip Erdogan of Turkey: “While our country embraces close to four million Syrians, we are also combating on the ground terrorist organizations that have drowned the region in blood and tears.”

Now in its eighth year, the war between Ukrainian forces and Russian-backed separatists in eastern Ukraine has become a flash point in the East-West divide that persists from the Cold War era. Russia’s 2014 annexation of Ukraine’s Crimean Peninsula has never been accepted by the United States and its European allies.

Foreign Minister Sergey V. Lavrov of Russia: “When the right to self-determination runs counter to the West’s geopolitical interests, as it did in the case of the people of Crimea’s expression of free will at the 2014 referendum on reunification with Russia, it forgets all about it and introduces illegitimate sanctions for the exercise of this right.”

President Volodymyr Zelensky of Ukraine: “Both Yalta and Crimea have been occupied for eight years now. How do we want to revive the U.N. if the place where the idea of the U.N. originated is occupied by a permanent member of the U.N. Security Council?”

A $4.5 billion dam built by Ethiopia on the Blue Nile has seriously worsened relations with its neighbors Egypt and Sudan, which say the project, the Grand Ethiopian Renaissance Dam, threatens their water rights.

President Abdel Fattah el-Sisi of Egypt: The failure to resolve the dispute reflects Ethiopia’s “clear intransigence and unjustified rejection to engage positively with the negotiations process in its successive stages, and instead choosing a unilateral approach and imposing facts on the ground.”

Demeke Mekonnen, deputy prime minister of Ethiopia: “Our humble attempt to light the houses of millions of Ethiopians and create hope for our youth is politicized before global bodies. This peoples’ project also received unending threats. Ironically, we are accused and threatened for drinking from our water.”

Venezuela has descended into economic ruin because of corruption and the discredited policies of the government, which largely blames sanctions imposed by the United States. More than five million Venezuelans have fled since 2014, the largest exodus in recent Latin American history.

President Nicolás Maduro of Venezuela: “We have taken the path of deploying the productive forces of a country subjected to a hellish blockade, criminal persecution and cruel torture of its people.”

President Jair Bolsonaro of Brazil: “In our border with neighboring Venezuela, the ‘Operation Welcome’ by the Federal Government has already received 400,000 Venezuelans displaced by the severe economic and political crisis brought forth by the Bolivarian dictatorship.”

Who, and Where, Is Peng Shuai?