Home Entertainment ‘Diana: The Musical’ brings the stage to Netflix, but ‘The Crown’ hangs... 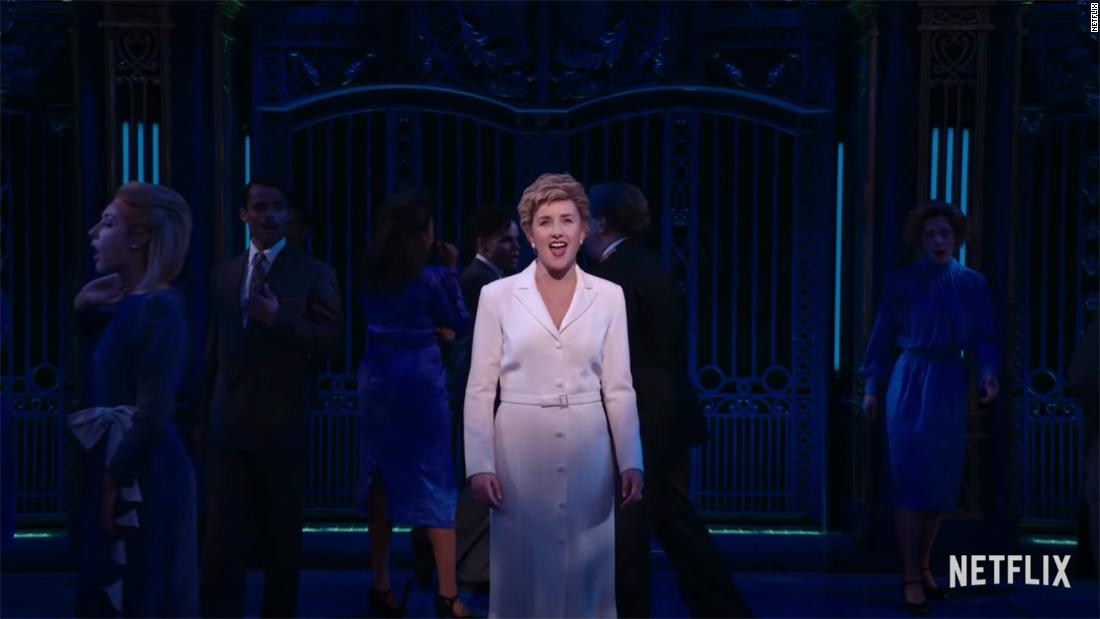 Joe DiPietro (who wrote the book/lyrics) and David Bryan (music/lyrics) previously collaborated on the Tony-winning “Memphis,” and they’ve teamed again with “Come From Away” director Christopher Ashley. Yet the process of filtering Diana Spencer’s journey from wide-eyed 19-year-old through her divorce from Prince Charles feels a little too been-there, seen-that, despite the energetic use of the large cast to inhabit a wide variety of roles.

“Flashbulbs fill the air,” Diana (Jeanna de Waal, whose voice shines throughout) sings on her first visit to the palace, before being reminded later by the ravenous press corps — in sequences that bring to mind “Evita” — that if she signs up for the terrible job of marrying into the Royal family, “Honey, we are part of the deal.”

Prodded by Queen Elizabeth II (Judy Kaye) that it’s time to wed, Charles (Roe Hartrampf) awkwardly professes a sort-of love for Diana, followed by marriage and parenthood. Yet he remains distant, continuing his infatuation with Camilla Parker Bowles (Erin Davie), who, with the benefit of TV closeups, exhibits quiet unease as the couple exchange their wedding vows.

If it all sounds familiar it obviously should, which ratchets up pressure on the music and staging to bring something lustrous and distinctive to this template. Despite flashes of wit and abundant talent, a first viewing doesn’t find much that rises to that level, as Diana sings about being “Underestimated,” strained rhymes pair “Camilla” and “Godzilla” and more clever ones articulate “A life of desperation in the Windsor corporation.”

As with “Come From Away,” Ashley does a remarkable job of making the cast feel like multitudes, and the costumes (including a particularly impressive quick-change moment) are appropriately dazzling, reflecting Diana’s realization that glamor and style were often the most effective weapons she possessed in the court of public opinion.

Logistically, it’s worth noting the project comes to Netflix after a Covid-induced delay. The musical was filmed last September at the Longacre Theatre without the benefit of a live audience, which makes the cast’s energy admirable under those circumstances, with de Waal capturing Diana’s elegance as well as her pain and heartbreak.
Royals completists will likely consider this a necessary addition to their collections, with “The Crown” having just cleaned up at the Emmys and “Spencer,” starring Kristen Stewart as the princess, due out in November.

Still, the sheer abundance of that watch list represents a double-edged sword. “Diana: The Musical” might make for a fine night out at the theater, but viewed on Netflix, what’s billed as a “special presentation” becomes another shiny bauble that ultimately doesn’t feel particularly special.

Showdown Over Northern Ireland Has a Key Offstage Player: Biden

1 rabbit saw 9 elephants while going to the river answer-...

Pfizer to vaccinate entire city in Brazil as part of study.