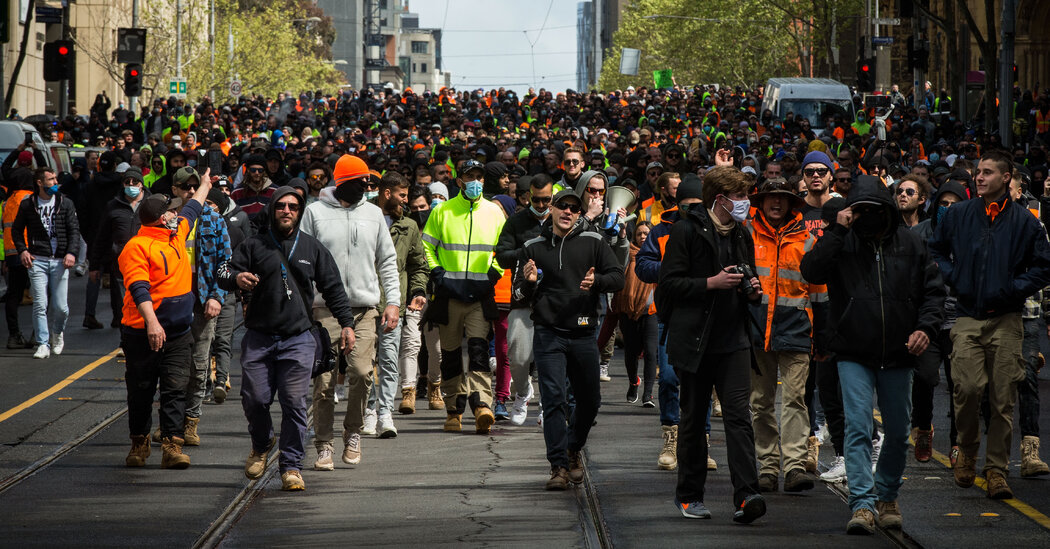 
Construction workers in Melbourne, Australia, clashed violently with the police for the second day in a row on Tuesday in a dispute over mandatory vaccinations.

Up to 2,000 protesters descended into the city’s central business district, the police said. Videos posted to social media showed workers hurling bottles at the police and setting off flares, while officers in riot gear fired rubber bullets and used pepper spray. One TV journalist said he had urine thrown in his face.

The protests began after the state government in Victoria, where Melbourne is the largest city, mandated vaccinations for workers as it struggles to contain a quickly growing outbreak of the Delta variant. The demonstrators have promised to keep protesting, chanting “every day” as they marched.

The union representing construction workers has not supported mandatory vaccinations but has distanced itself from the protests, saying they were “heavily infiltrated by neo-Nazis and other right-wing extremist groups.”

Construction has been among the few industries that have largely stayed open throughout the pandemic in Victoria but the authorities have become increasingly concerned that it may be a hotbed for coronavirus transmission.

After media reports last week that three out of four construction sites were breaching virus safety rules, the state government mandated vaccinations for workers in the industry.

Australian authorities have been reluctant to mandate vaccinations beyond high-risk sectors like health care.

In response, construction workers staged sit-ins on Friday, before escalating to protests this week. On Monday, a small number of workers gathered in front of the offices of the construction union and threw projectiles at the building.

On Tuesday afternoon, the police said they had made 44 arrests, with the number expected to grow, and that three officers had been injured and police cars attacked and damaged.

Eve reveals pregnancy on Instagram: ‘We finally get to tell everyone!’

As Populists Decline, the Center-Left Sees Hints of a Comeback

Spooky movies to get you in the Halloween spirit