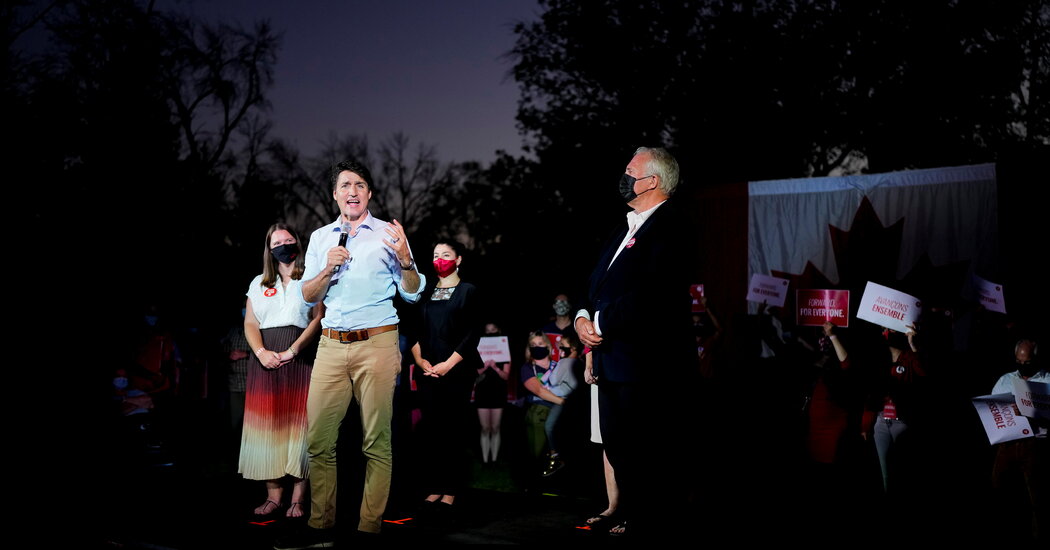 
It was a political calculation. And on Monday Prime Minister Justin Trudeau will find out if it succeeded.

When Mr. Trudeau announced a snap election last month — two years ahead of schedule — his aides were apparently hoping that the lift in approval ratings for his handling of the pandemic would translate into a decisive win, giving his Liberal Party the majority in Parliament that it lost in the last election, in 2019.

He characterized the call not as a political gambit, however, but as pivotal moment in the country’s history. In the 36 days that followed, he does not appear to have persuaded many Canadians to see it that way.

Instead, there was continued grumbling about holding an election even as the Delta variant of the coronavirus was straining hospitals in some areas. Mr. Trudeau’s opponents characterized his move as a reckless power grab. Last weekend, Erin O’Toole, the leader of the Conservative Party and his chief rival, even called it “un-Canadian.” If the campaign ultimately holds any distinction, it may be as the most annoying one in recent memory.

Mr. Trudeau argued that, like his predecessors in the aftermath of World War II, he needed a strong mandate from voters to vanquish the pandemic and reset the nation’s economy on a path to recovery. While he avoided saying so directly, what the Liberals sought was a majority of the seats in the House of Commons. In the 2019 election, voters denied that to the party, which has meant Mr. Trudeau had to rely on votes from opposition parties to pass legislation.

If final polls prove accurate, Mr. Trudeau will again be denied. The Liberals standings dropped sharply at the start of the campaign, and have remained stuck in a statistical tie with the Conservatives, at about 30 percent each.

“I’m wondering if the Liberals, in their minds, are saying: ‘Dang it, why did we, why did we call it?” said Kimberly Speers, a political scientist at the University of Victoria in British Columbia. “If we do end up with another Liberal minority government, how long is it going to last? And then how long is Trudeau going to last?”

Mr. Trudeau first came to power in 2015 by presenting himself as a new voice in politics with a new approach and fresh policies. He started that campaign in third place, behind the incumbent Conservatives and the left-of-center New Democratic Party. His victory was a surprise.

This time, instead of presenting a fresh vision, Mr. Trudeau focused on arguing to voters, explicitly or otherwise, that a return to a Conservative government under Mr. O’Toole would wipe out Liberal achievements in a variety of areas: gun control, gender equity, climate change, child care, poverty reduction and above all, ending the pandemic and getting Canadians vaccinated.

“Mr. O’Toole won’t make sure the traveler sitting beside you and your kids on a train or a plane is vaccinated,” Mr. Trudeau said at a campaign rally in British Columbia last week. “Mr. O’Toole doesn’t lead, he misleads.”

But in Mr. O’Toole, the prime minister encountered a much different opponent than the Conservative leaders of the two previous elections. In a bid to broaden his party’s appeal, Mr. O’Toole, who took over the party about a year ago, produced a 160-page platform that turned its back on many core Conservative positions, like opposition to carbon taxes.

And during the campaign, he even reversed one of his key promises, to repeal Mr. Trudeau’s ban on 1,500 models of assault-style rifles, once it became apparent that it held little appeal to voters who weren’t core Conservative loyalists. He has, however, maintained his opposition to mandatory vaccination and vaccine passports.

“I am a new leader with a new style,” Mr. O’Toole, a former air force helicopter navigator and corporate lawyer from Ontario, said at the outset of the campaign.

Analysts have forecast that even though the candidates are statistically tied, the Liberals’ concentration of support in the most populous Canadian provinces — Ontario and Quebec — suggest that the party will gain the most seats, if not a majority. If that happens, Mr. Trudeau will have put the country through a 600 million Canadian dollar vote to produce a Parliament more or less like the one he dissolved.

The Myth of Big Tech Competence

Thousands of Migrants Huddle in Squalid Conditions Under Texas Bridge

‘Completely Lost’: For Some Afghans, Returning Home Is as Difficult as...