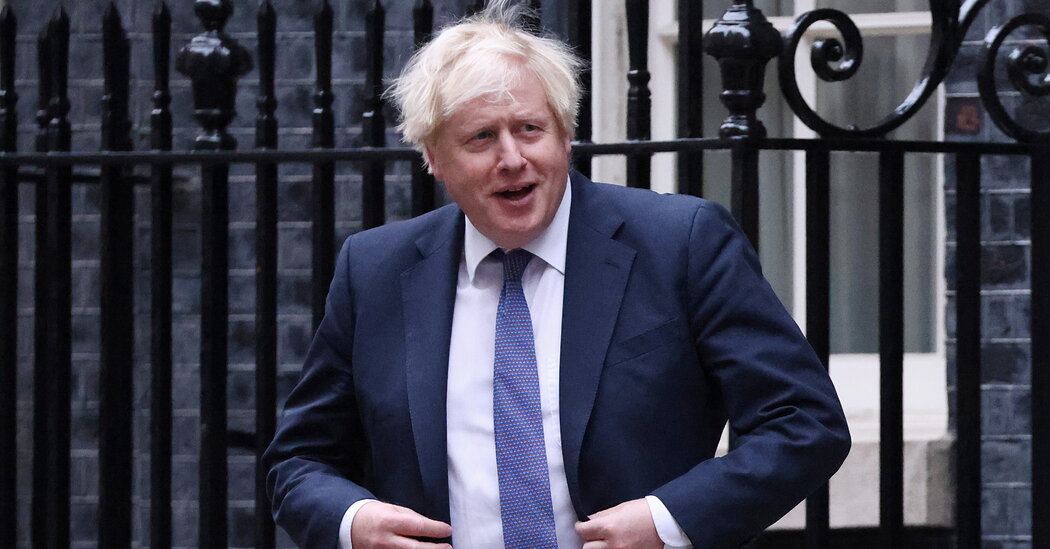 
LONDON — Prime Minister Boris Johnson has long stymied opponents by bluffing and blustering his way out of corners that would trap a more conventional politician. But in Parliament on Wednesday, faced with a corruption scandal and bad news on other fronts, his Houdini-like skills deserted him.

Mr. Johnson spluttered as the leader of the Labour Party, Keir Starmer, demanded he apologize for his role in the furor over Conservative Party lawmakers taking lucrative outside work. It was part of a pattern of reversals and broken promises, the Labour leader said, that included the government’s likely retreat on a high-speed rail link between northern cities.

“Everybody else has apologized for him, but he won’t apologize for himself,” Mr. Starmer thundered. “A coward, not a leader.”

It has been a brutal stretch for a prime minister who only two weeks ago was hosting world leaders at a climate conference in Glasgow.

Now, Mr. Johnson faces a low-grade mutiny from his party over the second-jobs scandal, which has sent London tabloids into a feeding frenzy over the perceived “sleaze” factor in government. He risks letting down his party’s newfound base in England’s industrial heartland by weakening plans for the rail connections. And he could ignite a trade war with the European Union if he rips up post-Brexit rules governing Northern Ireland.

While Mr. Johnson’s 80-strong majority in Parliament has so far made him bulletproof, even amid the pandemic’s misery and Brexit’s turmoil, analysts said he was entering the most perilous phase of his tenure yet.

“He’s a weaker figure today than probably he has ever been at any point since entering No. 10, if you look at the polls and you look at how quickly some of his base is fracturing,” said Matthew Goodwin, a professor of politics at the University of Kent. The Conservative Party’s “internal Civil War was real,” he added.

Mr. Johnson’s plight was evident in Parliament. When he tried to regain his footing by lobbing questions about corruption back at Mr. Starmer, a lawyer who once earned extra money advising clients, the speaker of the House of Commons, Lindsay Hoyle, rebuked Mr. Johnson for not playing by the rules of the weekly “Prime Minister’s Questions” session. Conservative backbenchers were left to grumble restively.

Two weeks ago, Mr. Johnson instructed them to vote in favor of a botched attempt to save a Conservative colleague, Owen Paterson, who broke lobbying rules and was threatened with suspension from Parliament. An outcry forced Mr. Johnson to back track and his reversal was complete this week — in humiliating fashion — when he proposed banning lawmakers from being paid as consultants on parliamentary business.

That angered those who now face the loss of a lucrative sideline, while the debacle has rattled other Conservative lawmakers who fret about being punished by voters over the ethics scandal that has engulfed their party.

Many were elected for the first time in 2019 in districts in the north of England that once solidly supported the Labour Party — gritty towns and cities where a lawmaker’s annual salary of around £80,000, or $107,000, is seen as generous.

More disappointment is likely to come on Thursday when the government is expected to water down its promises to spend tens of billions of pounds on new train networks to connect cities in the north. Critics cite this as an example of the fuzziness behind the government’s marquee policy of “leveling up” — spreading economic prosperity to the middle and north of England.

John Curtice, a leading public-opinion pollster who is a professor of politics at the University of Strathclyde in Glasgow, said Mr. Johnson’s handling of the lobbying debacle had “managed to annoy more or less everyone and raised doubts about the quality of his leadership and his judgment.”

Mr. Johnson is also taking a mild hit in opinion polls in which he has typically come out ahead. After trailing the Conservative Party for months in the polls, Labour has grabbed a one-point advantage for the first time since January. But Mr. Curtice characterized it as a “dent, not a tsunami” and, by historic standards, not a significant lead. For Mr. Johnson to face a genuine threat to his leadership from within the Tory ranks, analysts said, the party’s poll numbers would have to collapse.

Still, there are worrying signs beneath those numbers. Mr. Johnson is losing support among people who voted for Brexit. As many as a quarter of those who voted for the Conservatives in 2019 now say they don’t know which party to vote for, Mr. Goodwin, of the University of Kent, said.

Among their grievances: Mr. Johnson’s broken promise not to raise taxes, worries about high public spending and the failure to stop an influx of migrants crossing the English Channel from France in small boats.

“That is reflecting a broader concern over the direction of Johnson’s premiership,” Mr. Goodwin said. “He’s basically alienating the right-wing flank of his party.”

Mr. Johnson will likely weather the corruption scandal. The problem, Mr. Goodwin said, is that “there are bigger and darker clouds on the horizon” with a variety of problems looming.

Among them, Britain has been in a tense negotiation with the European Union over the trade arrangements that govern Northern Ireland, which is part of the United Kingdom but shares a border with Ireland, a member of the European single market. Mr. Johnson is expected to decide in a few weeks whether to rip up those rules, a move that could quickly escalate into a trade war with the European Union.

Negotiators for both sides are trying to devise solutions. Mr. Johnson’s negotiator, David Frost, said on Wednesday that the government’s preference was still to make a deal with the European Union before Christmas.

But Mr. Johnson left open the prospect of a confrontation. The European Union, he said in Parliament, used a provision in the trade deal last January to restrict shipments of coronavirus vaccines from Continental Europe to Northern Ireland. For Britain to do the same thing, he said, would be “perfectly legal.” In fact the European Union reversed course within a matter of hours and did not pursue its threat.

The European Union has warned it would retaliate by imposing extra checks on trucks carrying goods to and from Britain — a move that could cause chaos in the busy days before Christmas. A clash over Northern Ireland would also antagonize the Biden administration, which worries about the corrosive effect it might have on the 1998 Good Friday Agreement that ended decades of sectarian violence there.

Rather than risk all that, many analysts expect Mr. Johnson to back down. But some predicted he would do so only after a show of brinkmanship, since a clash with Brussels could unify an otherwise querulous Conservative Party.

“He might actually like a nice period of war with Europe because it will appeal to his backbenchers,” said Jonathan Powell, who served as chief of staff to a former prime minister, Tony Blair. “But he’s still going to have to back down, which will cause more political instability in Northern Ireland.”