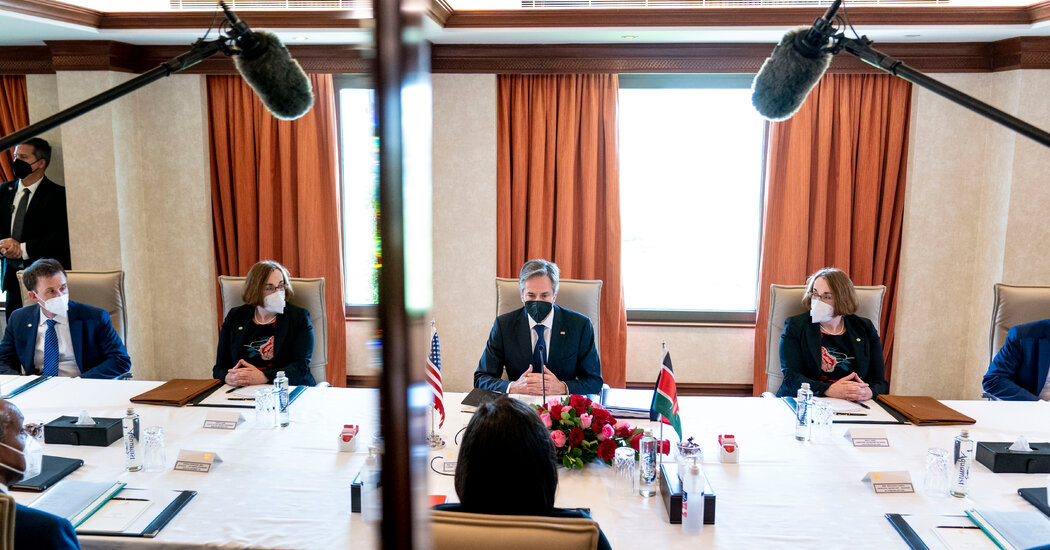 
Secretary of State Antony J. Blinken called on Wednesday for a halt to the violence in Ethiopia, where a civil war threatens to engulf the Horn of Africa nation and destabilize a volatile region where the United States has struggled to prevent a series of democratic reversals.

Speaking in neighboring Kenya, on the start of a three-country swing through Africa, Mr. Blinken declined to say whether the ethnically driven conflict in Ethiopia constitutes a genocide. But he said there would be consequences for what the United Nations and human rights groups have described as brutal attacks against civilians in the year-old conflict between Ethiopian government forces and fighters from the northern Tigray region.

“The fact is that we have seen, and continue to see, atrocities being committed, people suffering,” Mr. Blinken said at a news conference with Kenya’s cabinet secretary for foreign affairs, Raychelle Omamo. “Regardless of what we call it, it needs to stop. There needs to be accountability, and we are determined there will be.”

Mr. Blinken arrived in Nairobi overnight Wednesday, making him the highest-ranking Biden administration official to visit sub-Saharan Africa. Among his top priorities was to advance diplomacy to resolve the conflict in Ethiopia, part of wave of political upheaval that has fueled questions about the Biden administration’s approach to the continent.

Reiterating a State Department travel warning, Mr. Blinken urged Americans in Ethiopia to leave as soon as possible using commercial airlines. In a conversation days ago with Ethiopia’s deputy prime minister, Demeke Mekonnen, the secretary of state called on him to open up humanitarian access to northern Ethiopia.

The expanding conflict was a danger not just to Ethiopia but to the wider region, Mr. Blinken said, and a source “of deep concern to us and to our partners, including here in Kenya.”

On a stop in Nigeria this week, Mr. Blinken will outline a vision for U.S. policy toward Africa, one that is expected to focus on the value of democracy to the continent’s future. Counterterrorism is also expected to be a key topic: Hours before Mr. Blinken’s arrival in Nairobi, suicide bombers detonated two bombs in the heart of Kampala, the capital of neighboring Uganda, killing at least three people and injuring at least 33 others. The Islamic State, which has been active in East Africa for years, took responsibility for the attack.

Some critics say the Biden administration has been inattentive to Africa, a common complaint about U.S. foreign policy but one that has gained more currency as China, America’s top strategic competitor, plants deeper political and economic roots on the continent and anti-American jihadist groups continue to thrive there.

American officials are concerned about democratic backsliding across the continent, which has seen a wave of military coups in recent months — including in Sudan, where a coup last month quashed a democratic transition that followed the 2019 ouster of the country’s longtime autocratic ruler, Omar Hassan al-Bashir.

Mr. Blinken said the transition to democracy in Sudan needed to be “put back on its tracks,” beginning with the reinstatement of the civilian prime minister, Abdalla Hamdok.

Experts say the four successful military coups in Africa this year — including in Guinea, Chad and Mali — are the highest number in more than 40 years.

Kenya has played a key role in diplomatic efforts to peacefully resolve a conflict between the Ethiopia’s central government and Tigray rebels.

“This is Rwanda-esque,” added Patricia Haslach, who served as the U.S. ambassador to Ethiopia from 2013 to 2016. Ms. Haslach stopped short of saying that a genocide might be occurring, but other experts have called that a realistic possibility in a conflict increasingly defined by ethnic identity.

The Clinton administration’s failure to intervene and potentially prevent the massacre of as many as 800,000 ethnic Tutsis in Rwanda in 1994 has haunted former U.S. officials for decades.

Mr. Blinken plans to conclude his trip with a visit to the Senegalese capital, Dakar.

‘Dancing with the Stars’ has another double elimination

A Socialite, a Gardener, a Message in Blood: The Murder That...

How Does This End?