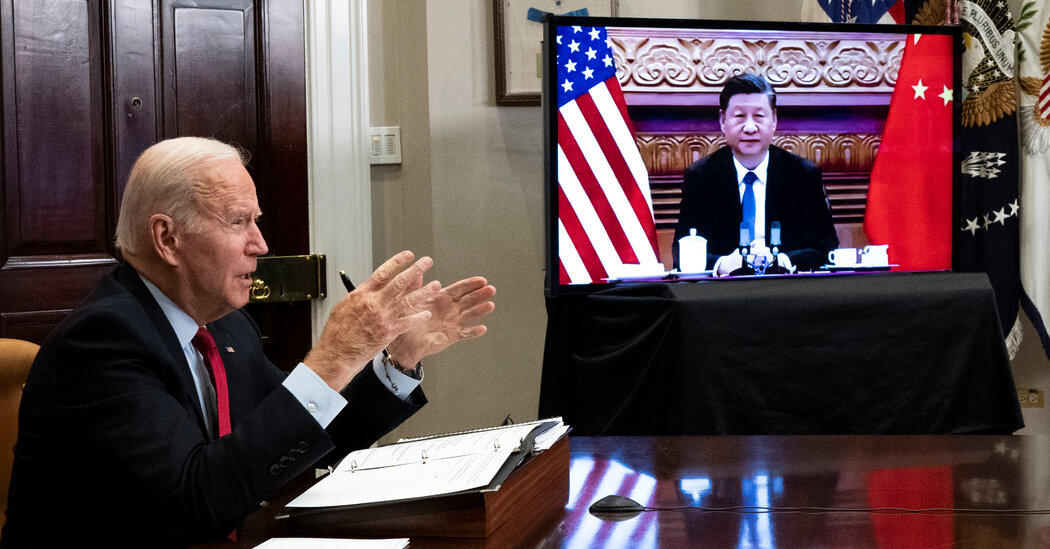 President Biden and China’s leader, Xi Jinping, are meeting for at least three hours in a virtual summit on Monday evening as the United States seeks to engage in what the administration calls “intense competition” with China while preventing serious conflict.

A senior U.S. official told reporters on Sunday that the president would emphasize the need to keep “communication lines open” as the two countries confront disagreements over issues like the future of Taiwan, the militarization of the South China Sea and cybersecurity.

Members of Mr. Biden’s team have been guarded about what topics he intends to raise with Mr. Xi on Monday. The senior administration official, who spoke on the condition of anonymity to preview the meeting, broadly outlined a few of the issues that were likely to come up.

The official said Mr. Biden planned to address several points of disagreement, including China’s human rights abuses, America’s commitment to defending Taiwan, China’s support of its state-based industries and its policies regarding cybertechnologies.

Since becoming president, Mr. Biden has spoken twice with Mr. Xi, but they have not met in person this year. Administration officials said the virtual meeting was meant to reassure both sides that misunderstandings and miscommunications would not lead to unintended clashes.

Mr. Biden has repeatedly suggested that it should be possible to avoid active military engagement with China, even as the United States engages in vigorous competition with Beijing and continues to confront the Chinese leadership on several significant issues.

But the call, which was initiated at Mr. Biden’s request, reflects his administration’s deep concern that the chances of keeping conflict at bay may be diminishing.

Also on the agenda are areas in which Chinese and American interests appear to be aligned, including efforts to combat global warming. But the administration official said that Mr. Biden would make clear to Mr. Xi that working to prevent climate change was not a “favor” to the United States, but rather a decision by China to act in its own best interests.

That the summit was taking place virtually, not in person, was a concession to China’s leader, Xi Jinping.

The White House had hoped that he and President Biden would meet at the Group of 20 gathering in Rome last month, but Mr. Xi did not attend. He has not left China since Mr. Biden took office in January — in fact, not since January 2020, when the coronavirus was beginning to spread from China.

The ostensible reason for remaining home still seems to be Covid-19, but some experts have speculated that Mr. Xi could not afford to be away before an important political gathering that ended last week.

He used that forum to solidify his stature within the Communist Party, bolstering his case for what is widely expected to be a third five-year term as China’s paramount leader, beginning next year. With the coronavirus still a threat, it is conceivable that Mr. Xi might stay home until the party’s national congress next November.

That reflects more than just internal political machinations. It is in keeping with China’s increasing insularity, forged by a growing confidence — hubris, some might say — that the country under Mr. Xi’s leadership is the master of its own destiny, less dependent on the rest of the world for validation as its economic and military might solidifies.

Still, Mr. Xi’s absence has coincided with the withering of China’s international standing, with public sentiment in many countries turning against the country’s behavior at home and abroad. He faced sharp criticism for submitting a letter to the climate talks in Glasgow and for joining India in watering down the final statement to reduce pressure on cutting the use of coal.

Lurking beneath the many tensions between Beijing and Washington is the question of whether the two countries are slipping into a Cold War, or something quite different.

One of the few areas of agreement between Xi Jinping, China’s leader, and President Biden is that letting relations devolve into Cold War behavior would be a mistake of historic proportions.

Mr. Xi said in a speech on Thursday that “the Asia-Pacific region cannot and should not relapse into the antagonism and division of the Cold War era.” Addressing the Asia-Pacific Economic Cooperation forum with a recorded message, he urged Asian countries to resist forming “small circles on geopolitical grounds,” a clear reference to Mr. Biden’s efforts to shore up alliances of democratically minded countries to counter China.

Mr. Biden has insisted that the United States is not seeking a new Cold War. His national security adviser, Jake Sullivan, said last week, “we have the choice not to do that.” The summit meeting between the two leaders is part of a White House effort to make sure that the right choices are made — and that accidents and misunderstandings do not propel either country in the wrong direction.

There are many reasons to argue that what is happening today is quite different from the Cold War. The amount of economic interchange, and entanglement, between the United States and China is huge; with the Soviet Union it was minuscule. Both sides would have a huge amount to lose from a Cold War; Mr. Xi and Mr. Biden both know that and have talked about the risks.

Other deep links — the mutual dependencies on technology, information and raw data that leaps the Pacific in milliseconds on American and Chinese-dominated networks — also never existed in the Cold War.

“The size and complexity of the trade relationship is underappreciated,” Mr. Biden’s top Asia adviser, Kurt M. Campbell, said in July as part of his argument of why this moment significantly differs from the Cold War of 40 years ago.

Still, with his repeated references this year to a generational struggle between “autocracy and democracy,” Mr. Biden has conjured the ideological edge of the 1950s and ’60s. And so has Mr. Xi at moments, with his talk about assuring that China is not dependent on the West for critical technologies, while also trying to make sure that the West is dependent on China.

Without question, the past several months have resounded with echoes of Cold War behavior: the Chinese air force running sorties in Taiwan’s air identification zone; Beijing expanding its space program, launching three more astronauts to its space station and accelerating its tests of hypersonic missiles meant to defeat U.S. defenses; and the release of a top Huawei executive for two Canadians and two Americans in what looked like a prisoner swap.

At the same time, the United States announced that it would provide nuclear submarine technology to Australia, with the prospect that its subs could pop up, undetected, along the Chinese coast. It did not escape Chinese commentators that the last time the United States shared that kind of technology was in 1958, when Britain adopted naval reactors as part of the effort to counter Russia’s expanding nuclear arsenal.

Nearly two years after the Trump administration concluded the first phase of a trade agreement with Beijing, the pact increasingly looks like an enduring framework for relations between China and the United States.

Trade, and the truce known as the Phase 1 agreement, is expected to be a focus of the virtual summit between President Biden and Xi Jinping, China’s top leader.

While Mr. Biden questioned the Trump administration’s aggressive trade approach during his presidential campaign, his White House has continued trying to counter China’s industrial subsidies and other trade measures with tariffs and other investment restrictions. The Biden administration remains wary of any broad lifting of tariffs unless China curbs its wide array of government subsidies to advanced manufacturing industries.

Mr. Xi hinted this month in a video speech to an import expo in Shanghai that his government would be willing to discuss some subsidies. But Beijing is broadly committed to greater economic self-reliance, a policy founded on subsidies to industries like semiconductors and commercial jets, for which China relies heavily on imports.

China is also reportedly close to allowing Boeing 737 Max jets to return to its skies after crashes about three years ago in Ethiopia and Indonesia. The Federal Aviation Administration approved the plane late last year, and it has since been widely used elsewhere without incident.

Katherine Tai, the U.S. trade representative, announced last month that the Biden administration would restart a Trump-era procedure for excluding a few specific products from tariffs. The exemptions are for products that American companies can prove that they genuinely need and cannot readily purchase elsewhere.

China was allowed to retain some tariffs on U.S. goods under the Phase 1 agreement, but has already issued exemptions for most of its tariffs.

No issue between the United States and China is more contentious than the fate of Taiwan, an island democracy that functions as an independent nation in all but official recognition by most of the world.

The People’s Republic of China has claimed Taiwan since the defeated Nationalist forces of Chiang Kai-shek retreated there in 1949, but in recent months Beijing has grown increasingly vocal in criticizing U.S. efforts to strengthen the island’s democracy and its military defenses.

China’s foreign minister, Wang Yi, set the tone for the summit between President Biden and China’s leader, Xi Jinping, saying over the weekend that the prospect of Taiwan’s independence was “the biggest threat to peace and stability.”

Beijing’s assertive language is often coupled with displays of its growing military prowess. It has menaced Taiwan with military exercises simulating an amphibious assault and air patrols that have swept through the island’s air defense identification zone. Many military analysts, including some in the Pentagon, believe that the maneuvers by an increasingly well-equipped Chinese military could be a prelude to an invasion.

The Biden administration, like the Trump administration before it, has warned China that its military operations and threats are dangerous. The United States, which withdrew its official recognition of Taiwan as a condition of re-establishing relations with China in 1979, has responded by stepping up diplomatic efforts to bolster President Tsai Ing-wen of Taiwan.

That has included visits by officials and lawmakers, as well as weapon sales.

China says those efforts stoke popular sentiment in Taiwan to formally declare independence, which Beijing has warned would lead to war. Wariness in China intensified when President Biden answered a question at a televised town hall last month by declaring, imprecisely, that the United States was committed to Taiwan’s defense in the case of an attack.

In a phone call with Secretary of State Antony J. Blinken over the weekend, Mr. Wang, China’s foreign minister, warned, “Any connivance of and support for the ‘Taiwan independence’ forces undermine peace across the Taiwan Strait and would only boomerang in the end.”

Microsoft’s Jacky Wright had to leave the UK to become its...

Childhood vaccinations have lagged across the world because of the pandemic.