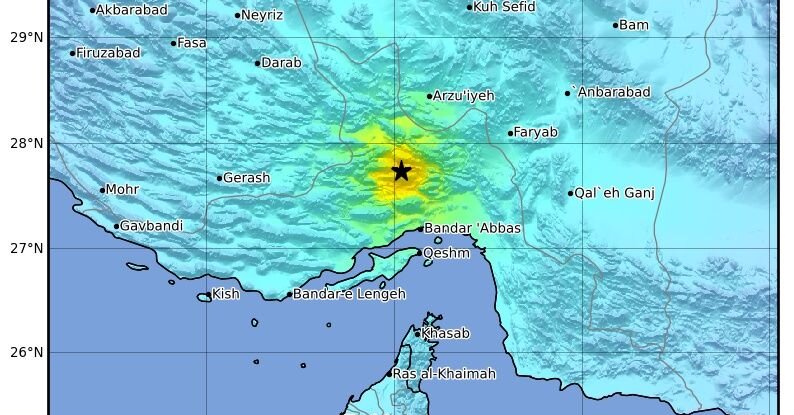 Azizollah Konari, the governor of Bandar Abbas, the province’s capital and a major seaport, said that a 22-year-old man was killed when an electric pole fell on his head as a result of the earthquakes, according to a state TV report. Officials said that they had turned off power to some of the city’s districts because of extensive damages to electrical infrastructure.

The Iranian Seismological Center said that the quakes had struck Qeshm Island in the Strait of Hormuz, about 640 miles south of Tehran, The Associated Press reported. The center said that the magnitudes were 6.4 and 6.3, and that the heaviest temblor had occurred at a depth of about 11 miles. There was no immediate report of damages. The United States Geological Survey set the earthquakes at magnitudes of 6 and 6.3.

The epicenter was about 36 miles southwest of Bandar Abbas.

State TV said that the quake had been felt in Kerman and Fars Provinces, both north of Hormozgan. The report said that President Ebrahim Raisi had ordered his senior vice president, Mohammad Mokhber, to visit Hormozgan Province as soon as possible.

The head of Iran’s Red Crescent Society, Mehdi Valipour, told state TV that emergency crews had inspected scores of villages in the area where the quakes took place and had not received any reports of casualties. He said damage to houses was minimal.

Mr. Valipour said that emergency crews would focus on providing shelter and tents for people who preferred to spend the night outdoors because of the fear of aftershocks.

Iranian social media carried some photographs of damage from the quakes, The A.P. reported, including one of a wall that had collapsed on a car.

Iran lies on major seismic faults and experiences one earthquake a day on average. In 2003, a magnitude 6.6 earthquake flattened the historic city of Bam, killing about 26,000 people. A magnitude 7 earthquake that struck western Iran in 2017 killed more than 600 people and injured more than 9,000.

Supply chain stress is intensifying and showing no signs of fading,...

Tech Titans, Bored With Their Empires, Are Searching for New Frontiers

Inside the Thai Temple Where Tattoos Come to Life