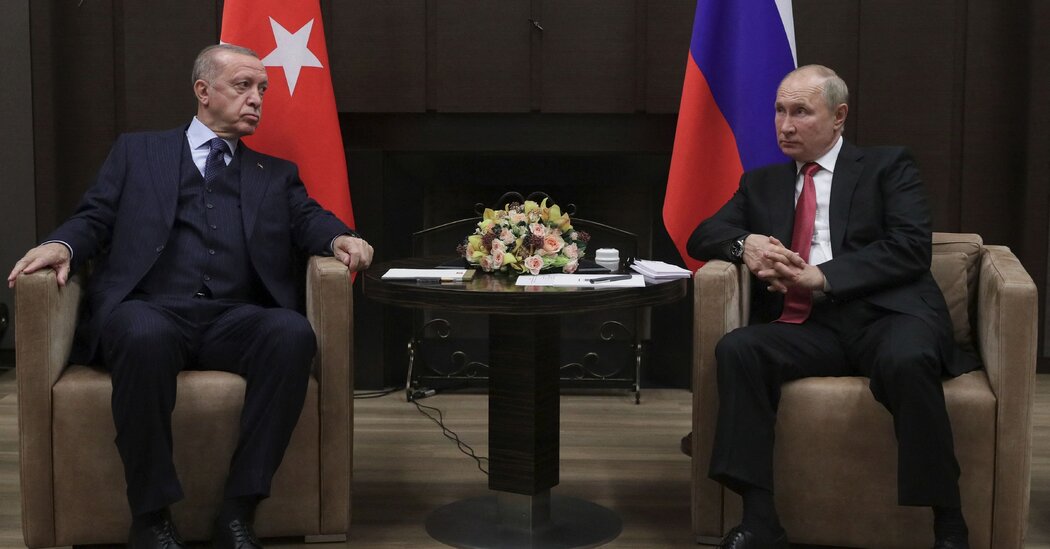 
MOSCOW — Relations between President Recep Tayyip Erdogan and the Biden administration may be frayed, but on Wednesday the Turkish leader made abundantly clear his access to an alternative partner for trade and military deals: President Vladimir V. Putin of Russia.

At a three-hour meeting in the Black Sea resort city of Sochi, Russia — the first for the two presidents in more than a year — Mr. Putin and Mr. Erdogan discussed weapons purchases, trade and a nuclear reactor Russia is building in Turkey.

The Turkish leader used the meeting to praise military deals with Russia, even though Turkey is a member of NATO, the primary Western military alliance. The military cooperation — particularly Turkey’s purchase of the sophisticated S-400 air defense system from Russia, which NATO opposed — had gone far enough, he said with Mr. Putin by his side, that “there is no path back in this sphere.”

The deal for the S-400 missiles set off alarms in Washington, which subsequently canceled Turkey’s purchase of next generation F-35 warplanes in 2019 and the following year imposed economic and travel sanctions. Nevertheless, Mr. Erdogan reinforced in Wednesday’s meeting his intention to purchase a second batch of the S-400s.

Turkey and Russia have been both friends on energy, trade and military deals, and enemies in multiple Middle Eastern conflicts. Through mercenaries and proxies, the countries are on opposite sides in the wars in Syria and Libya, while both Turkish and Russian troops are serving as peacekeepers in the conflict in Nagorno-Karabakh.

But highlighting the fallout with the United States, not the geopolitical standoffs, seemed to take precedence Wednesday for both leaders. In the public portion of their meeting Mr. Putin, whose overarching foreign policy goal has been to undermine NATO and the E.U., only briefly mentioned “cooperation” in the three conflicts where Turkey and Russia are on opposing sides.

Mr. Erdogan often explains the fruitful relationship with Russia as necessary for a regional power such as Turkey and has questioned why the United States should dictate Turkey’s bilateral relationships. Russia is building Turkey’s first nuclear power station and opened a natural gas pipeline to Turkey under the Black Sea.

Despite Mr. Putin’s remarks, natural gas prices have soared on global markets, not just in Europe, and it not clear that any arrangements with Russia will give Mr. Erdogan the relief he was seeking and badly needs.

The meeting came amid signs that Syria and Russia are preparing a new offensive against Turkish-backed rebels in Idlib, the last rebel-held region of Syria, after an 18-month truce. And in Libya, Turkey had deployed hundreds of soldiers and Syrian militants to prop up the Government of National Accord, while a Russian mercenary company linked to the Kremlin, Wagner, has backed the opposing side led by General Khalifa Haftar.

Ahead of Wednesday’s meeting Mr. Erdogan stressed that peace in Syria was of the greatest importance among the issues between them, emphasizing that he wanted to discuss not only the immediate situation in Idlib, but also to find a way to end the war overall.

Nearly four million people are living in the remaining rebel-held part of Idlib and Mr. Erdogan is particularly concerned to prevent a new offensive that would send a wave of displaced Syrians across the border. Turkey is already host to four million refugees, the majority of them Syrians, and the popular mood, amid an economic downturn with high unemployment and inflation, has turned against them.

But Mr. Putin, in his public comments at least, passed quickly over these issues. “On the international arena we cooperate fairly successfully, and I mean in Syria and our coordinated position on Libya,” he said.

Since a dangerous clash in 2015, when Turkey shot down a Russian plane on its southern border with Syria, Mr. Erdogan has carefully cultivated his relationship with Mr. Putin, meeting him in person often several times a year, at the expense of the longstanding alliance with NATO and the United States.

Much of Mr. Erdogan’s diplomacy is interpreted as a bargaining position, threatening the United States by cozying up to Mr. Putin, but creating distance when he is seeking something from Washington.

When asked at a news briefing in 2019 if he intended to take Turkey out of NATO, Mr. Erdogan dismissed the notion. Yet he has tested the alliance sorely, suggesting this month he will buy more Russian antiaircraft missiles.

Aykan Erdemir, director of the Turkey Program at the Foundation for Defense of Democracies in Washington and a former opposition member of Turkey’s Parliament, said Mr. Erdogan’s plans to buy more S-400 missiles should be a “wake-up call” for the Biden administration.

“The Turkish president will continue to play a spoiler role within NATO and provide Putin further opportunities to undermine the trans-Atlantic alliance and its values,” he said in emailed comments. He added that Turkey’s offer to play a role in Afghanistan after the U.S. withdrawal was aimed at making the West dependent on Turkey there, to reduce any pushback from Washington on other issues.

But Mr. Erdogan was traveling to Sochi with his “weakest hand” yet in the pair’s 19-year relationship, Kerim Has, a lecturer in Turkish-Russian relations at Moscow University, wrote in a personal blog.

He is not only desperate to forestall the offensive in Idlib, but also badly needs a favorable deal to purchase natural gas from Russia, Mr. Has wrote. To get that, he added, Mr. Erdogan might be forced to buy a second round of S-400 missiles.

“Erdogan may have to buy the second part of S-400s for the sake of his ‘personal survival,’” he wrote.

When the meeting ended without a briefing for journalists, Mr. Has concluded that Mr. Erdogan was leaving empty-handed. “In my opinion, Erdogan did not get what he expected,” he wrote on Twitter.

While Mr. Erdogan has been seeking to repair relations with the United States and the European Union, he acknowledged recently a coolness from President Biden.

“In my 19-year-long life as a ruler as Prime Minister and President, the point we arrived in our relations with the U.S. is not good,” he told the Turkish news media in a briefing. “I have worked well with the junior Bush, with Mr. Obama, with Mr. Trump, but I can’t say we have a good start with Mr. Biden.”

Yet Another Covid Victim: Capitalism