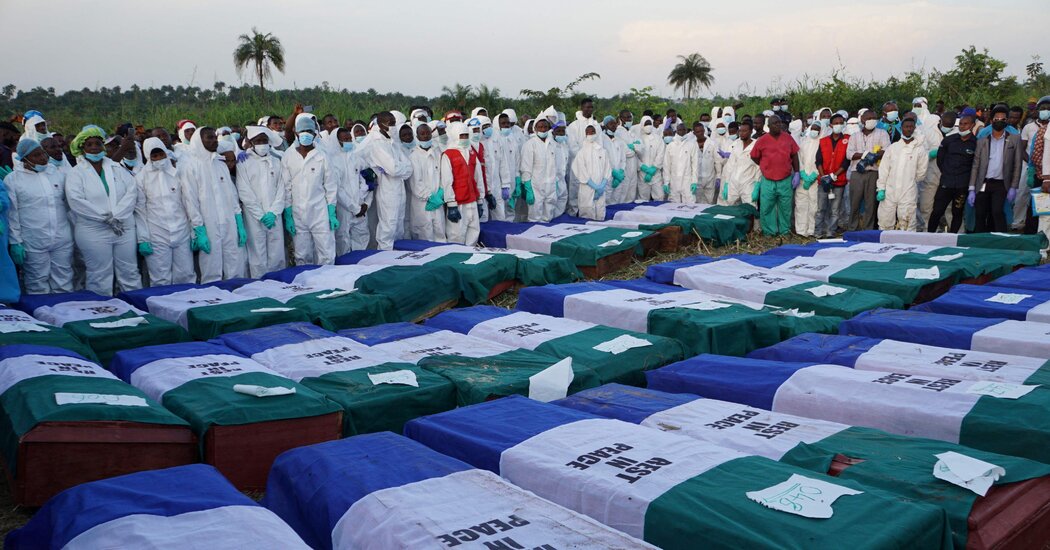 
FREETOWN, Sierra Leone — When a fuel tanker exploded in Sierra Leone last week, killing 98 at the scene, the many survivors included a motorcycle-taxi driver who, while stuck in traffic, was engulfed by the fire.

The driver, Yusuf Kamara, sustained burns to 80 percent of his body. But for a time, he could walk and talk — and worry about the $27 he’d lost in the fire, three days’ wages.

“This was not child’s money, not small money, and it all burned,” he said in an audio note, the last recording of his voice, before he perished.

Several days after the explosion in Freetown, the country’s capital and largest city, the tragedy has claimed more lives and put the country’s already precarious health care system to the test. The death toll has climbed from 98 to 144, as of Saturday, and more survivors were still being admitted to hospitals on Friday.

In a country without a single burn unit, and with vital medications unavailable or running low, doctors and nurses are trying to stave off infections in the patients who have survived this far.

It is a herculean task. Most of the patients still being admitted suffered burns over 25 percent of their bodies. At a hospital in Freetown known as 34 Military, the mortality rate has been around 60 percent. As patients die at another, Emergency Hospital, their beds are going to victims who are hurt less badly, and who could not initially be admitted for a lack of space.

While Covid-19 has not overwhelmed Sierra Leone, which has reported just 6,400 cases and 121 deaths during the entire pandemic, the country is no stranger to health crises. An Ebola epidemic that began in 2014 killed almost 4,000. Floods and mudslides killed many hundreds in 2017.

But the severity of the injuries from this explosion shocked even doctors seasoned by previous crises. “The scale and magnitude, I’ve never seen anything like this,” said Dr. Songor Koedeyama, a hospital medical superintendent who, in the blast’s aftermath, volunteered at Connaught hospital, the country’s main hospital, where most of the victims were taken.

Dozens of drivers and bike riders were killed and injured in the accident. Some were so poor that when they saw the tanker leaking fuel just before the explosion, rather than fleeing, they rushed to gather some. Many of those killed were the breadwinners for their families, so the tragedy plunges some of the neediest in this West African nation further into desperation.

From the moment patients started flooding hospitals, doctors, nurses, administrators and government officials have worked around the clock to cobble together supplies and manage a patchwork response. An emergency coordination team was up and running by the morning after the explosion.

But from the start, the weakness of Sierra Leone’s health system have shown. Hospital staff members are rapidly burning out, and there are few clinicians to replace them. Government pharmacies have been unable to provide essential medicines, including those for managing acute pain and antibiotics. And doctors worry that this will only get worse.

The health sector in Sierra Leone is fragmented, a messy constellation of public, private and nonprofit programs. Although the government is nominally in charge, it relies heavily on foreign donors’ funding and supplies.

Patients surviving on meager earnings regularly have to buy essential medicines from private pharmacies. But Lawrence Sandi, the managing director for the National Medical Supplies Agency, said that the government is picking up the tab for the burn victims.

When he heard about the explosion, Mr. Sandi said, he went straight to Connaught Hospital’s medical store, gathered supplies there and gave them to doctors. With key supplies like IV fluid running out just after the accident, he went to the private pharmacy next door to buy more, he said.

“I just said whatever you have, we’ll pay for it,” Mr. Sandi said.

But at hospitals across the city, several patients’ families said that they were still told to pay for medicines and other supplies.

For the survivors who have made it this far, care will become more and more difficult, according to Dr. Kilongo Papy Mulailwa, a surgeon who helped with the response to the fire. Patients who are discharged will need to return to specialist hospitals for weekly treatment, for as long as a year.

“Plastic surgery, dealing with mobility, you’ll need a lot of physical therapy. All of which are very difficult to get in Sierra Leone,” he said. “You can anticipate that the next three months, for the ones who survive, will be very difficult.”

But a shortage of antibiotics is causing a more immediate issue.

“My fear is we don’t want to start a patient on it and then we don’t have enough for their entire treatment, because they might develop resistance,” Mr. Sandi said.

Those who have survived are not only worried about their own recovery, but about the impact their absence will have on their families.

“I take care of my brothers and sisters and my children,” Ibrahim Sorie, a 25-year-old driver said on Wednesday from his bed at the 34 Military hospital. His legs, arms, and much of his head were burned, and in a whisper, he said he was in extreme pain. “I take care of all of them, I pay for school fees. So now, with the accident, I just don’t know what I’ll do. We really need support from the government.”

The families of those who have died, already bereaved and traumatized, now also face financial ruin.

Mariatu Mansaray, the sister of one victim, was panicking about making ends meet as she waited for a mortuary to release her younger brother Ibrahim’s body on Thursday. She still does not know how exactly Ibrahim, a traffic police officer, caught fire.

Not long before he died, Ibrahim told her from his hospital bed, “I didn’t see fire, I just saw smoke.”

The mortuary charged her $23 to wash Ibrahim’s body, and $23 for an ambulance — in total, more than she made in a month. On top of that, she had to spend $165 to feed the mourners, an imperative in a country where funerals are extremely important. And then there would be the seven-day mourning ceremony in the family’s home village.

“I have to take care of his child now, and I have two children, I have to take care of all of them,” she said, tears in her eyes, dressed in pink and purple lace for the funeral. Her mother is sick, she said, and relied on Ibrahim’s salary each month to get by. “It was already too much on all of us, and now that he’s gone, it’s worse.”

From his hospital bed, the motorcycle taxi driver, Yusuf Kamara made a video message for his mother last Saturday, two days after the fire. “Tell my mom I won’t die,” he said. “Give her courage.”

On Sunday night, he called his cousin, Memunatu Kamara, asking her to cook him some soup. But by the time she arrived with it the next morning, she was told he had died.

On the way to the funeral, Mr. Kamara’s 7-year-old son saw a motorcycle rider.

“Look, Daddy is coming!” the little boy said to his grandmother, not understanding what had happened.

“Everyone started crying,” Ms. Kamara said. “There was not a dry eye in that car.”

Madrid is set to remove most of its restrictions on Monday.

Protests fizzle as activists fail to galvanize the masses against the...

Dionne Warwick has a message for Jake Gyllenhaal about Taylor Swift’s...